The Young and the Restless Spoilers: Will Y&R Fans Give Mark Grossman A Fair Chance To Play Adam Newman?

BY Sean O'Brien on May 13, 2019 | Comments: one comment
Related : Soap Opera, Spoiler, Television, The Young and the Restless 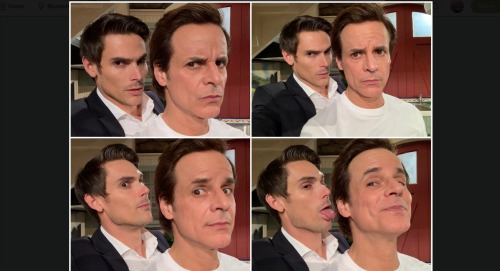 The Young and the Restless spoilers documented the on- and off-screen drama regarding Adam Newman (as now played by Mark Grossman). Three other adult actors portrayed this lead character prior to the most recent recast. Considering the logic connected to show history and the reality that soap opera fans are fiercely loyal to actors who play certain roles, will Y&R fans give Grossman a chance to succeed as Adam?

The short answer is, yes. The overwhelming percentage of Y&R’s audience, or of any soap opera, supports the show itself. The actors, while loved, represent parts of a full on-screen team, rather than individual tennis singles’ players.

The other short answers are, no, or maybe. There are people who loved Michael Muhney as Adam. They feel he was wronged and deserves what they feel was his job back. Fronting logic for a topic that is steeped with emotion isn’t wise.

Some in the audience feel that Justin Hartley played the alternative edition of Adam well. His passing as Adam was the endgame for them.

Let’s attempt to balance logic and emotion, though that’s purely an aim. This author believes that Chris Engen, the original adult version of Adam, Muhney, and Hartley are all good actors. Each person was given different scripts at different points in this iconic show’s history.

Due to the length of Muhney’s tenure, he arguably generated the biggest fan base. He was eligible for rehire, as was proven when Y&R interviewed him in the summer of 2014. That important point dashes all information-lacking attempts to directly claim, or imply otherwise.

Muhney wasn’t brought back five years ago, or during the most recent decision-making process. The actor has previously acknowledged the past, taking blame for being too assertive on-set, and has humbly wished Y&R well on many occasions.

Hartley is starring on This Is Us. He wasn’t available to return as Adam, but surely would have been fine in any presumed revival arc.

Y&R is presenting yet another version of Adam, as Grossman’s real life age places him younger than who Adam was when Hartley’s edition departed. So, that’s part of the hook this time around.

Fans are important in daytime, with all parts of the audience being considered. If enough keep watching a show receives ongoing advertising support and is renewed.

As long as Y&R stays atop the field, the Grossman recast won’t be reasonably chided as being wrong. Sure, some may not watch, or reject what the new actor offers.

But the entire audience matters and Grossman, like the actors before him, deserves a chance. He’ll get it from all light-hearted, loyal soap fans who enjoy this genre, which provides escapist entertainment. CDL is a leading source for everything linked to The Young and the Restless. Check back regularly for Y&R spoilers and news!