The Young and the Restless Spoilers: Camryn Grimes Celebrates A Major Life Milestone 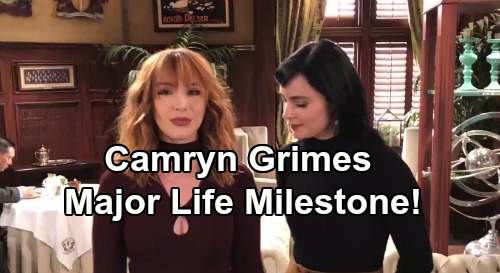 The Young and the Restless spoilers has some fun news to pass on about a popular Y&R star. Camryn Grimes, who portrays Mariah Copeland on the CBS soap, recently shared on social media that she had made a major life purchase.

Camryn also shared a short video in which she’s showing off her new car, which is a Honda CRV. In the video, she dances happily around the car and looks pleased as can be about her new purchase. Overlaying the video is the following text: “In all seriousness, I’m pretty proud of this one. My FIRST brand new car! It’s nothing insane or fancy but it’s exactly what I wanted and a big deal to me. So I’m gonna dance how I feel…LIKE A BOSS!”

Camryn’s fans have enjoyed her tweet and have been replying their congratulations to her. One fan commented, “You go girl! Awesome for you!” while another said, “Nice looking wheels Camryn…you can never go wrong with a Honda…enjoy your new ride!!” And still another made a cute Y&R joke, saying “Out here partying while poor Sharon is in prison lol jk.”

Of course, that fan was referring to Sharon Newman (Sharon Case) on Y&R, who has just been sentenced to three years in prison for her role in the J.T. Hellstrom (Thad Luckinbill) murder and coverup. On Y&R, Mariah is currently beside herself with worry about Sharon’s conviction and sentence.

But for Camryn herself, life’s looking pretty carefree right now. After all, she’s got her new car to drive herself to work every day at CBS Studios! Are you excited for Camryn? Stay tuned to the CBS soap and don’t forget to check CDL often for the latest Young and the Restless spoilers, updates, and news.

BUT this is the first BRAND new car I’ve ever bought. All the bells & whistles. So it’s a win in my book.💫 pic.twitter.com/yUro8viOrc