The Young and the Restless Spoilers: Revenge Is Sweet, Phyllis’ Takedown Is Brutal – Does She Deserve Any Sympathy? 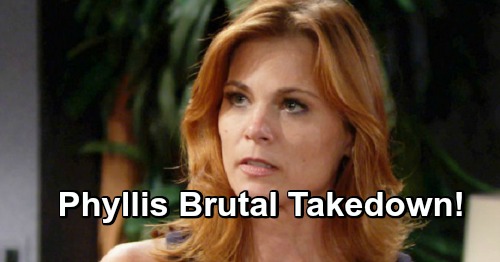 The Young and the Restless (Y&R) spoilers tease that Phyllis Summers (Gina Tognoni) will continue to battle guilt over how things turned out. She scored a nice immunity deal and took the rest of the cover-up crew down in the process. That’s bad enough, but the fact that Phyllis was the ringleader makes all this even worse. They would’ve called 911 that night if it hadn’t been for her!

Of course, no one knows if Phyllis might’ve been right. She was convinced that the cops wouldn’t believe Nikki Newman’s (Melody Thomas Scott) side of the story. Phyllis argued that Christine Williams (Lauralee Bell) would’ve taken her opportunity to bring down a Newman. Based on how vicious Christine the abuse victim-blamer has been, Phyllis’ view may have been accurate.

Regardless, what’s done is done and Phyllis isn’t paying the price like the others…yet. The Young and the Restless spoilers say Phyllis will still get what she’s got coming to her. Victoria Newman (Amelia Heinle) will make sure of it! She may even team up with Nikki and Sharon Newman (Sharon Case) to make it happen once they ultimately are cleared.

Naturally, the three of them wouldn’t want to do anything illegal. They’d be wise to stick with immoral and strike Phyllis on a very personal level. There are ways of making someone suffer without facing legal consequences for it. Phyllis could still suffer in pretty much every area of her life. She’s close to losing the Jabot CEO spot – and her former partners in crime won’t even be behind that.

The loss of her job won’t be the only hit Phyllis takes. She’s already been dumped by Nick Newman (Joshua Morrow) and now Billy Abbott (Jason Thompson) truly loathes her. Even Jack Abbott (Peter Bergman) views Phyllis in a different light. Her Y&R pairing options are limited, so her romantic future isn’t looking bright.

If Phyllis somehow manages to land in another relationship soon, it could easily be sabotaged. The remaining cover-up crew members might even find something Phyllis could get locked up for. Those Newman investigators tend to find all kinds of good dirt. Victor Newman (Eric Braeden) obviously wants to take down Phyllis as well, so she’s got far too many enemies. The Young and the Restless spoilers say revenge will be sweet!

Do you feel sorry for Phyllis at all? Do you think she deserves to pay for betraying the rest of the girls’ night gang? We’ll give you updates as other Y&R news comes in. Stay tuned to the CBS soap and don’t forget to check CDL often for the latest Young and the Restless spoilers, updates, and news.