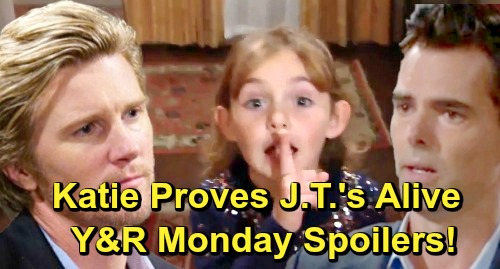 The Young and the Restless (Y&R) spoilers for Monday, March 18, tease that Nick Newman (Joshua Morrow) and Billy Abbott (Jason Thompson) will fight for the women they care about. Victoria Newman (Amelia Heinle), Nikki Newman (Melody Thomas Scott) and Sharon Newman (Sharon Case) are all in a tight spot. They can’t bear the thought of spending years behind bars, so the guys are set to take action.

Billy and Nick will finally nail down their risky plan on Monday’s new Y&R episode, March 18. They’ll determine that J.T. Hellstrom (Thad Luckinbill) has to be alive after Katie Abbott (Sienna Mercuri) offers a new clue. The Young and the Restless spoilers say Katie will sing a familiar song. It’ll be a little tune that J.T. used to sing to her back when he was living with Victoria.

Billy will realize that Katie’s secret friend from the ranch also sang this song to her. Once he’s armed with that info, he’ll know they’re on the right track. Y&R spoilers state that Nick and Billy will fill in the convicted cover-up crew. Victoria will be the most skeptical when she learns J.T. is still alive, but Billy’s song clue will convince her it has to be true.

Once Nikki, Victoria and Sharon know there’s hope, it’ll be easier to make them go along with what’s next. The Young and the Restless spoilers say Billy and Nick will hijack the prison transport van soon enough. They’ll take the ladies to the Abbott cabin and leave them there while they carry out a plot to lure J.T. out of hiding. This scheme will bring some great twists and turns for Y&R fans.

Since it turns out Victoria’s house has been bugged all this time, Nick and Billy will intentionally mislead J.T. through a conversation. They’ll pretend they dropped the women off at a Dark Horse warehouse and hope it points J.T. in the wrong direction.

The Young and the Restless spoilers say J.T. will ultimately learn Sharon, Victoria and Nikki’s real location instead, so they’d better brace for drama!

Y&R viewers won’t want to miss Monday’s shockers or any of the chaos happening the week of march 18-22. We’ll give you updates as other news comes in. Stick with the CBS soap and don’t forget to check CDL often for the latest Young and the Restless spoilers, updates, and news.