The Young and the Restless Spoilers: Friday, March 15 – Summer Threatens As Kyle Delays Wedding – Lola’s Life on the Line 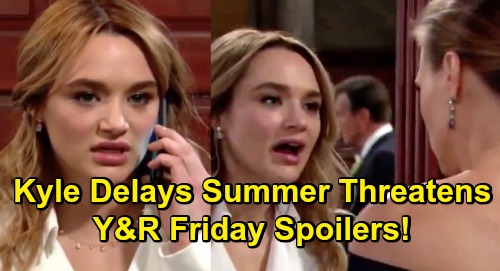 The Young and the Restless (Y&R) spoilers for Friday, March 15, tease that Summer Newman (Hunter King) and Kyle Abbott (Michael Mealor) will prepare for their big day. Their sudden engagement and whirlwind wedding plans have certainly raised suspicions. A few GC residents think they’ve figured out Summer’s liver donor game, but she’s determined to deny it and make this look legit.

Of course, Kyle couldn’t keep something this huge from Mariah Copeland (Camryn Grimes). She would’ve pried it out of him anyway, so he admits the truth to his bestie in Thursday’s episode. Kyle also swears Mariah to secrecy, but she’ll probably fill Tessa Porter (Cait Fairbanks) in on Friday. Tessa was pretty invested in Kyle and Lola Rosales’ (Sasha Calle) romance, so she’ll want to know what’s up.

Kyle and Summer’s loved ones will gather for the ceremony, but Jack Abbott (Peter Bergman) will have some questions first. He already told Kyle he would support him, but he’ll have some last-minute concerns. Kyle fought so hard to be with Lola, so Jack will wonder if this is what his son really wants. He won’t think Kyle should rush into something he’s going to regret and hurt both women in the process.

Jack will struggle to make sense of why Kyle would agree to marry Summer. Kyle may not give Jack a straight answer, but he’ll definitely get cold feet. The Young and the Restless spoilers say Summer will grow impatient as she waits for her groom. She’ll leave Kyle an angry voicemail letting him know there’ll be consequences if he doesn’t show up. That donor surgery isn’t happening without exchanged vows.

Honestly, it’s kind of dumb for Kyle to even hesitate. He can’t be with Lola if she’s dead! Marrying Summer is the only solution, so why not just get it over with? Kyle could always have it annulled once Summer keeps her end of the bargain. What’s she going to do? It’s not like Summer can repossess her liver after the surgery’s done.

Kyle will eventually make it to the wedding and put on a fake smile. He’ll make Summer his wife before she heads to the hospital to save Lola. Meanwhile, Y&R fans can expect a calmer discussion for Ana Hamilton (Loren Lott) and Devon Hamilton (Bryton James). She wasn’t happy when he called her out for lying about her debt. Ana’s credit report is squeaky clean, so Devon just doesn’t understand.

The Young and the Restless spoilers say they’ll make a deal on Friday. Ana will vow to stop keeping secrets and Devon will agree to stop butting in her business. Unfortunately, they’ll both break their promises by the time next week rolls around. We’ll give you updates as other Y&R news comes in. Stick with the CBS soap and don’t forget to check CDL often for the latest Young and the Restless spoilers, updates, and news.