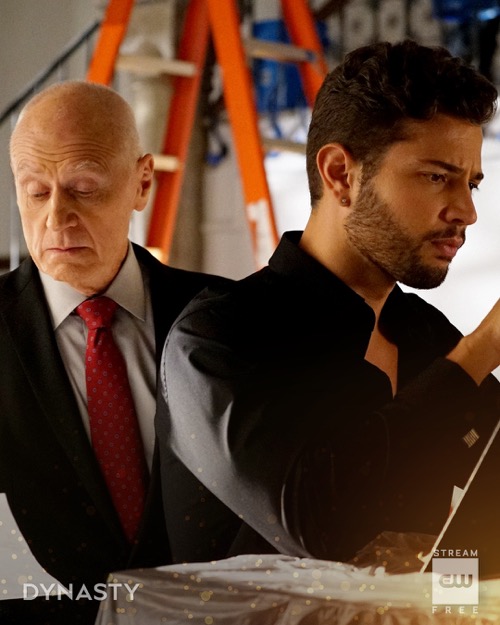 Tonight on the CW Dynasty the reboot of the 1980 series that followed the Carrington family airs with an all-new Friday, October 25, 2019, episode and we have your Dynasty recap below.  On tonight’s Dynasty season 3 episode 3 “Wild Ghost Chase,” as per the CW synopsis, “Fallon and Blake deal with the consequences of their actions in very different ways. Adam is on everyone’s “worst” list.

Sam gets a visit from an unexpected guest at the hotel. Dominique continues with her devious plans and Culhane is the recipient of Fallon’s impromptu goodwill.”

Cristal was officially Mrs. Carrington. She and Blake were married and this meant great things for her. She now couldn’t be pushed aside by the rest of the family. She was there to stay and some of the others weren’t happy about it. Adam for one hadn’t wanted her around. He thought he could get rid of her what with his father being jail and so Cristal got married to more or less spite him. Adam has to put with her up now. He couldn’t even be disgruntled about her having champagne for breakfast even if he did throw in some snide remarks.

Adam was just that unhelpful in a sense. Its why Cristal couldn’t stand him and why Fallon wanted him gone. She went to see her father in jail because she wanted to talk to him about Adam. Fallon asked her father to get Adam out of the house and he refused to do it. He said Adam was a great help with running the winery. He also didn’t want to help Fallon and so she flounced out of there. If she wanted her brother gone, she had to do it herself and she couldn’t really do that now that she supposedly turning over a new leaf.

Fallon is going this new stage of her life in which she calls it “Days of Atonement”. She started the community that she thought would be light and fluffy and was instead a community garden. One in which she had to create it from scratch. Fallon got rid of all the junk and garbage. She even got the new flowers ready to go in. She pushed that part as well as cleaning up the rest of the garden she was supposed to – to the next day because she wanted to go to the hospital. She ran into Evan Tate, Trixie’s brother, while she was there and there was a connection.

Fallon was definitely attracted to him. Evan also didn’t hate her as his mom did and if anything he was sympathetic to her plight. He even seemed like a great guy. But Fallon has met plenty of guys that seemed like they were great in the beginning. She had counted Jeff as one of them once upon a time and looked at what happened with him. His sudden disappearance now has also created issues and it led to even more questions. Evidence linking his disappearance to Adam has gone missing and his family doesn’t know what to do.

Monica went to Dominque with her concerns. She thought her mother would be just as concerned as she was and she met with were lies. Dominque pretended to be shocked when she heard Adam’s cuff links were gone from evidence. What Monica was lying to her. Dominque knew those cuff links weren’t there and she was trying to hide that from Monica as much as humanly possible. She even broke into Jeff’s house later get rid of anything else around and that’s how Culhane found her. Dominique tried to pretend like it was nothing.

She thought she could lie to Culhane as she does everyone else and yet she failed to move. He later told Monica what he saw. He felt he owed her after what she did. Monica and Fallon signed over shares from Atlanix to him. Culhane was now a majority partner and all he had to do to get it was being accused of murder. Only that’s the thing about the Carringtons. They tended to reward the people after they’ve hurt them and the same could be said about Sam. Sam got a lot in his divorce settlement. It happened after he experienced a lot of heartaches and so there was that.

Sam had tried to open a hotel with his settlement. He had gotten close and then his hotel was threatened. The Historical Alliance had wanted to connect his hotel with a notorious bigot. To make things worse it was Melissa leading the charge. Melissa was the president of the Historical Alliance and she demanded that they take part in the grand opening. When Sam tried to push her out of the opening, she got all of his permits removed and she made it impossible for his hotel to open on time.

Melissa told him she wouldn’t back down until he allowed the plaque honoring the bigot to go up. Sam didn’t want to attach his hotel to such a man and so he asked Anders to sell the hotel for him. Sam later told Melissa at the party. She convinced him to keep the hotel and in exchange, she got him his permits back. Melissa got everything she ever wanted out of the deal, but Sam wasn’t sure how he felt about it. He told Anders that it felt like a bargain he shouldn’t have made. While Anders was being pragmatic about all of it.

Fallon in the meantime had finished her garden. It was then ruined the next day and so she blamed Adam for it. She saw his boots were muddy and she thought it meant he had been in the garden. He tried to tell her that it was from the vineyards and she wouldn’t believe him. She picked a fight with him at the Halloween party that got out of hand. They were seen fighting in front of investors as well as Blake. Blake got out of prison just in time to see his kids and he didn’t like it. He broke up the fight and decided to scale back Adam’s responsibilities with the vineyard.

Blake was now going to control to Cristal. Cristal had quickly won over the investors and she had Blake backing her up because she was the one that came up with the scheme to get him out on probation. As for the person that did ruin Fallon’s garden, that had been Evan. Evan wanted revenge for what happened to his family and he didn’t think Fallon was being punished enough. Fallon didn’t blame for how he felt and the two of them got to talking. They both realized they owed the other an apology and they almost kissed.

What stopped them was Liam. Fallon still cares about Liam and she didn’t want to ruin that. Even if he didn’t remember her. Fallon was trying to work around Laura’s restraining order and just when she was figuring things out – Adam came on the scene. Adam told Laura to take Liam home with her and now it looks like Liam and Ashley could be getting married because of it. Adam took great joy in telling his sister what he did and this was payback for their dad in taking the vineyard away from him.

And not even Dominique walked away unscathed because Jeff came back and both he and his sister wanted nothing to do with her now.

Not after she moved those cufflinks.