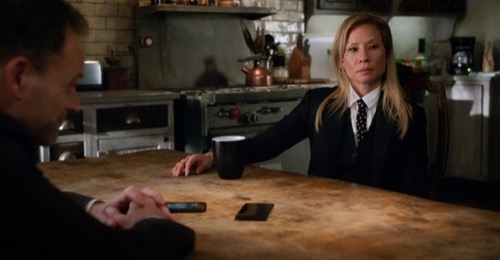 Tonight the CBS series Elementary airs with an all-new Thursday, July 25, 2019, season 7 episode 10 and we have your Elementary recap below. On tonight’s Elementary season 7 episode 10 called, “Holmes and Watson receive a shocking request to collaborate from their foe, Odin Reichenbach, when the tech billionaire asks them to test his new crime prevention system.

Tasked with investigating someone the program predicts will soon commit a crime, the duo worries Odin will take drastic action before they conclude their inquiry.”

Joan and Sherlock are using a video game to confirm a theory for a case. They are suddenly locked out of their computers and phones. The front bell rings, the CEO of Odkin Enterprises is at the door. He jammed all of their signals so they can’t record their conversations. He knows they reported him but he is here to try and work another case with them that is important. He has a man who he suspects is going to shoot up a cinema in the next few days. Meanwhile, a tour guide takes a group through the city on a murder tour. The group comes upon a woman dead in an alley. Some of the tour-goers think it is part of the tour until the guide tells them otherwise.

Sherlock updates Joan about what he has learned on their case. Their suspect Wesley Conrad made a large withdrawal from his bank and he has been looking at guns online. It looks like Odkin Enterprises was right to be interested. Marcus calls. The meet him at the morgue to look over a woman, named Kamile, who was found in an alley by a tour group. Her murder looks to be just like one from 18 years ago, the murder of Autumn Cleary, a cold case.

Joan and Sherlock get to work reviewing POI in the Cleary case. Sherlock leaves to track down Conrad and talk to him. He is angry a podcaster plagiarized his work. Meanwhile, they meet with the wife of a man who they think killed Autumn. The killer is dead now. The wife admits she knew her husband killed Autumn, he was a violent man but she kept it quiet. They had kids. They are grown now. She wants the truth to get out. Because he is dead there is no way he killed Kamile.

They head to the courtyard where Kamile was killed and check the surrounding buildings. It leads them to a “models apartment”. Sherlock finds a hidden elevator car. This is how Kamile’s body was moved, just like Autumn’s. Someone who knew about the elevator car is the killer. The models know nothing since they all come and go.

One of the models, however, heard Kamile talking on the phone about a lot of money. Back at the precinct, the building owner and his lawyer have come in. He admits he moved Kamile’s body. But he didn’t kill her, he yells out. Sherlock accuses him of having an underwear fetish. He did take her phone.

Joan and Marcus meet with a friend of Kamile’s who spoke with her just before she died. She tells them she was working with Kamile to overcome guilt. Her sister died after overdosing months back from heroin. Meanwhile, Sherlock poses as a gas worker and visits the home of Conrad, knowing he isn’t there. He finds guns. It looks like Odin was right.

Back at home, Joan tells Sherlock she thinks Kamile was murdered by the same person who killed Regina, her sister. After looking at the coroner’s report she didn’t overdose. They look into her phone’s venom account. She paid a man named Lim Baxter to look into her sister’s death. They head to his office and find the man dead on the floor with a plastic bag over his head and stun gun burns.

Sherlock pays Odin a visit with Conrad’s gun. He tells him how he took it and how he put Conrad in touch with a great law firm to hash out his legal issues so he doesn’t do anything violent. Odin laughs, Sherlock can’t stop all of these potential killers. Sherlock thinks otherwise with more manpower. Odin thinks it may be possible.

Back at home, a photo of Regina next to a DJ in a panda suit intrigues Sherlock. They track down the DJ and check his interactions with Regina. He made a comment about how angry his girlfriend makes him, he wants to kill her. They bring him in. He confesses to being her boyfriend. But tells them he was away in Brazil. She called and told him she was pregnant and due to having his baby soon. He talked her out of giving the baby up for adoption. He knows she had it. Sherlock puts it all together. It looks like Regina was killed on the same day she gave birth.

They head back to Regina’s sponsor, the one who was helping Kamile work through her guilt. She was acting as a go-between for Regina and the adoption agency and when Regina shared she was keeping the baby the woman got mad and killed her, upset she wouldn’t be getting her cut for the adoption. They take Regina’s sponsor in for the murder of Regina, Kamile, and Lim.

At Odin’s office, he shares that he doesn’t plan to change how he does things since Conrad killed his own parents. It looks like he was right all along and taking Sherlock’s non-violent approach didn’t pay off. He tells Joan and Sherlock to get out.