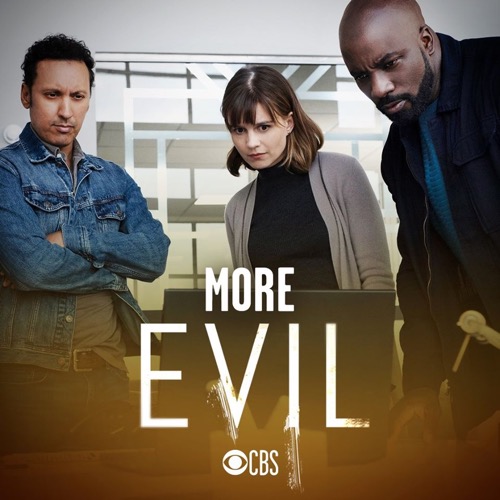 Tonight on CBS Evil premieres with an all-new Thursday, December 12, 2019 episode and we have your Evil recap below.  On tonight’s Evil season 1 episode 10 as per the CBS synopsis, “Kristen, David, and Ben are called to investigate an insidiously addictive Christmas song that’s spreading among an increasing number of students and the dangerous relationship between online influencers and their impressionable young followers.”

Tonight’s Evil season 1 episode 10 airs and looks like it is going to be great and you won’t want to miss it. So make sure to bookmark this spot and come back from 10 PM – 11 PM ET for our Evil recap.  While you wait for the recap make sure to check out all our Evil recaps, spoilers, news & more!

The trio was called out to a high school. It was an all-girls high school and they had a problem with four of the girls. The girls had started singing a song without lyrics. They could stop for a minute, but then they’d return to the song and they couldn’t stop. The church was later called in on the matter because the school believed the singing might be a sign of possession. They had needed help and David wasn’t leading the charge on the believer’s side. He usually does just that with their cases. He’s the first one to say its possession and so it came as a surprise when he let Kristen go in first. She was firmly on the side of the nonbelievers.

Kristen came at this problem as a nonbeliever. She wanted to find a scientific explanation for his singing and so she talked to the four girls that couldn’t stop themselves. They told her they didn’t why they were singing. They also mentioned they didn’t know where they had heard the song from and so Kristen came up with her own conclusions from that. She thought they had Stuck Song Syndrome. It’s a fancier word for earworm and its treated like any other form of auditory OCD. She thought the girls merely needed to have something they could think about rather than the song. And she and her team also found out where the song came from.

Kristen’s daughter Lynn had later overheard singing the song. She immediately recognized it from a meme called “Pudsy’s Christmas” and its actually an edgier version of Charlie Brown’s Christmas. Kristen and her husband had sung a song a few times and they hadn’t become addicted to it, but the trio called back out to the school because of the earworm spread. It started with four girls and it was now at fifty. The teachers didn’t know what was going on and the trio was forced to come at it another way now that it spread. Kristen thinks it might come about because of mass hysteria. There have been times where something started in one village and spread to three before it stopped.

There was an example of a “dancing plague” in 1518 in which people couldn’t stop dancing. Some eventually died from not eating or drinking and so the spread could become dangerous. Ben had wanted to see if there was something chemical at the school. He later found out there had been pesticides used on the girls’ vegetables being served at lunch and so he investigated that angle, but the girls at the school took a turn. They began shoving sharp instruments into their ears just to stop the voice. Two of them had needed to be hospitalized and so they asked the girls if they had eaten salad. And neither of them did.

What the girls did have in common, though, was Malindaz. Malindaz was a makeup and fashion blogger. She makes video tutorials every day. She also recently posted the Malindaz’s Challenge. She dared people to watch a two-minute video that would supposedly drive them insane and so, of course, the trio later watched it. Ben, David, and Kristen all watched these videos and it did nothing for them. They weren’t driven insane. Kristen had also watched the video loud enough that her husband and children could hear it. It did nothing for Andy either. The girls, on the other hand, had heard a voice coming from the tutorial and it later caused Kristen’s daughter Lila to shove a sharp object into her arm. And luckily her eardrum was going to recover.

Kristen didn’t know what was going on, but thankfully Ben found the answers. He found out there was a secret track underneath the tutorial and that only kids younger than sixteen could hear it. He said the voice was a suicide instruction meme. Ben thought Malindaz did it because she was a clout chaser and so the trio went to her apartment. They told her what he video has been doing. They also asked her who was behind it and she claimed it was someone producer named Mike. She said she had nothing to do with the video. Then she went to her therapist Leland Townsend and she told him how she was ruined because she used his track.

Leleand then reminded her that she was nothing without him. Malindaz has two thousand subscribers when they met and, under his tutelage, she came to have two million subscribers. So Leland told her to take the negative and make it a positive. She was going to make even more people see the video and all she had to do was make it forbidden. Malindaz created another video in which she apologized for putting people at risk. She told them that she didn’t mean to hurt anyone and that they should watch or download it. She also added how the video wasn’t going to be taken down until the end of the day and by then it would be everywhere.

Ben, Kristen, and David all realized that Malindaz would do anything for attention. There was nothing they could do to stop her and the video was now out there for everyone to see. Kristen checked in on her daughter to make sure she was okay and she was so focused on Laura that Lexi got away with what she did. Her daughter Lexi hit a bully at school. She really injured the other girl and she told her parents that’s what grandma told her to do. Her grandma later pretend not to know what Lexi was talking about, but grandma was lying to save her own backside. She had seemingly gotten advice from her secret boyfriend Leland and he helped her to manipulate Lexi to the point Lexi now knows not to snitch.

David meanwhile had finally did something about the funk he was in. He’s been feeling a little down ever since he slept with his dead fiancée’s sister because he knew he was breaking his vows and so he confessed everything to a priest. And if ended there, everything would have been okay except it did not end there. David began getting notes in his late fiancée’s handwriting. He thought it was her sister and it wasn’t her. She was getting the same messages as well. She also receiving pictures from someone that photographed them when they were together and so she was freaked out. She thought it was some weird stalker that behind it.

David just thought it was someone messing with them. He came home late at night and, out of the shadows, someone came at him with a knife. David fought him, but he sustained injuries and so he was left bleeding out on the pavement. And he was too weak to call for help.