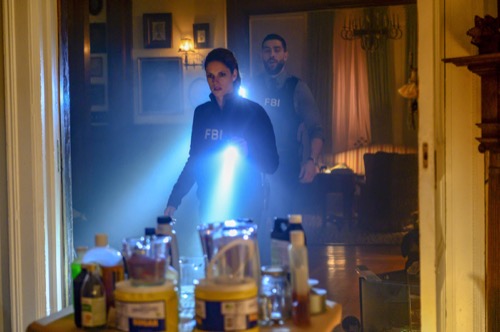 Tonight on CBS FBI premieres with an all-new Tuesday,  February 26, 2019, season 1 episode 15, “Scorched Earth,” and we have your FBI recap below. On tonight’s FBI episode as per the CBS synopsis, “A serial bomber appears to be targeting Wall Street’s elite. Maggie and OA search for a suspect who seems dead-set on revenge, while Dana deals with Spencer Briggs (Paulo Costanzo), a cocky profiler brought in to consult on the case.”

A female CEO tells her firm she isn’t happy they made #2 on the best list. Minutes later her secretary tells her a gift has arrived for her. She opens it. It blows up.

OA and Maggie arrive at the scene. Several are dead due to a pipe bomb. Meanwhile, Jubal tells the team about the CEO named Veronica. They need to start digging and learn all they cam about her. OA and Maggie talk to Veronica’s husband. He is very shaken and emotional. He mentions his wife fired a man named Nick Frost months back. He was aggressive and threatened to ruin her life.

OA and Maggie bring him in. He could care less she is dead but he didn’t dos it. Maggie reads an email sent by him months ago where he threatens t blow her up. He tells them he lost $33 million to her. She took credit for an account he brought in. Meanwhile, Quantico has sent a profiler to help on the case. Dana isn’t pleased, telling him they don’t need the help.

Reports on the bomb come back. Some of the shrapnel has gold in it. They piece it together. They are gold cufflinks, a gift given by Veronica to her employees. Just when Nick is looking more and more the guilty party another bomb goes off.

OA and Maggie talk to the owner of the cafe where the bomb went off. His employee Maggie was killed. They head back to the office and try to piece together any patterns or connections between the two but cannot find one.

Kristen discovers another employee named Stuart who Veronica fired and Carly blogged about. They ask Nick who says he isn’t a killer. There is no way Stuart would do it.

OA and Maggie head with SWAT to Stuart’s. He isn’t home, but the evidence inside the condo proves he is up to something bad.

OA and Maggie look around Stuart’s home. He has plenty of equipment for the bombs and cuff links. In the bathroom they discover blood everywhere. After some research, OA and Maggie head to a local hospital. Stuart is there but they cannot see him the nurse tells them. He tried to kill himself 6 days ago and has been in a coma since. He cannot be their bomber.

They reach out to Stuart’s ex, Martina. After ruling her out they focus in on Martina and Stuart’s son. They realize it is him. Martina tries to cover for him but they catch her in several lies. It looks like Cameron is trying to make those pay that ruined his dad’s life. Jubal puts a BOLO out on him.

Dana continues to bump heads with the profiler sent to them.

OA and Maggie take Martina’s phone and use it to talk to Cameron pretending to be Martina. When he walks down the street to his mother’s home, OA and Maggie grab him. He tries to run but they take him in.

Cameron tells them his family was sacrificed for nothing. After some talking, he angrily reveals someone is next. The team gets to work trying to stop another explosion and find his target.

Dana and the profiler argue about what Cameron is really thinking and who his next target is. Dana thinks it is Nick Frost while Spencer thinks it is another woman named Rose.

OA and Maggie head to a local restaurant where Nick is. They find the back pack. It has the bomb inside. OA clears out the room while Maggie brings the bomb to the commercial cooler. It goes off. OA screams for her. She is on the floor but okay.

Back at the office, they all clap for Maggie. Spencer commends Dana for her profiling work and instincts.