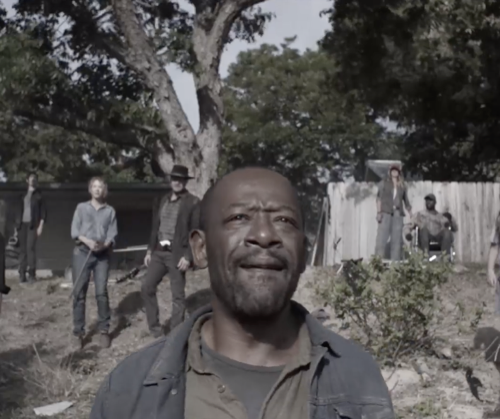 On AMC tonight Fear The Walking Dead (FTWD) airs with an all-new Sunday, June 2, 2019, premiere episode and we have your Fear The Walking Dead Recap below! On tonight’s FTWD season 5 episode 1 premiere called, “Here to Help,” as per the AMC synopsis, “Led by Morgan and Alicia, the group lands in uncharted territory in search of survivors to help – but everything is not as it seems in this foreboding new land.”

Can you believe FTWD Season 5 is already here? Don’t forget to bookmark this spot and come back later for our Fear The Walking Dead recap between 9 PM – 10:05 PM ET.  While you wait for the recap, don’t forget to check out all our FWTD news, spoilers & more, right here!

We see a young child named Dylan aiming to shoot a deer, he is with an older boy named Max, and they are both proud that he hid the deer; but it also causes a walker to come at them. Max tries to shoot the walker and the rifle jams. All of a sudden a plane flies overhead, Dylan and Max hit the ground and so do the walker. Dylan and Max start walking away and they see small fires, Dylan says, “The Growlers.” The continue walking and notice many more walkers coming, Max says they have to keep moving. Another walker approaches, Max’s rifle is still jammed. All of a sudden, Alicia comes out of nowhere and kills the walker, she tells them she is there to help.

Alicia continues to kill walkers, Dylan and Max go inside there plane where Alicia and the ones with her crashed, Morgan is inside with John, Morgan tells the boys they are here to help and ask if they are with Logan; they don’t know who Logan is. Alicia is going crazy killing walkers and Morgan heads out to help her. June is conscious, walkers are on the attack, she sees John outside the window and is relived. Al is now conscious as well.

Logan calls Morgan on the walkie talkie, Morgan tells him they are coming, it may just take a little more time than they thought to get there. Meanwhile, Luciana has a bad wound in her shoulder from a pipe going through it, but they are positive and get her ready to take with them.

Mogan and Alicia are shocked at how many walkers are coming, but they know they need to get out of there and now. All of a sudden Dylan and Max’s sister shows up on a van, everyone gets in. Their sister tells them the walkers are the least of their problems, they have no idea where they landed.

Alicia asks the sister what happened there, she says she doesn’t know. Dylan asks Al if she is a pilot, she says no. The sister wants more info about their relationship with Logan, she tells them the place is wore than it seems, they will see. They drive up to a roadblock, four walkers tied together. Al looks up and there are walker severed heads in the trees above. June reminds everyone that they need to keep moving. The sister says she is not driving through, Morgan says fine, they will walk through then. She changes her mind, tells Morgan that Logan better be worth it. Alicia breaks the roadblock, they drive through.

They arrive at a barn, it has a steel fence around it. Alicia knocks on the outer building door but notices that it is open. They go inside, lay Luciana down on a table. John looks in the garage, doesn’t seem to be anyone there.

Morgan finds a radio and tries to reach out to Logan, tells him they are at the truck stop. June tries to reassure Luciana that she is going to be ok. June tells John to help her. Dylan finds a toy truck and asks Luciana what they are for, people don’t need toys.

Morgan tells the siblings that they should come back with them, be a part of their group. Alicia tells Morgan that nobody has been at this truck stop for a long time. The sister is worried, they want to leave. She tells them to pack up and leave. June says they can’t leave, they have to remove the pipe from Luciana, they don’t have much time.

We see man, who turns out to be Logan, enter a company, he knows the code to the padlock to enter the building. Inside it looks like a manufacturing company, but there are beds, lots of them – looks like it was place for people to take refuge at some point.

June saved Luciana, she says she is very lucky about the location of the entry point of the wound.

Morgan keeps trying to reach out to Logan, all of a sudden he replies. Alicia still thinks something is not right. Logan says it is going to be tricky for them to come to him, he is with his crew.

Logan says he knows they have been leaving the boxes, and he doesn’t share Clayton’s views. Morgan asked why he brought them there, Logan says because he wanted to get what was his. Alicia says they crashed a plane just to help him. Logan says the truck stop is far away from him, then he says he did agree with Clayton on one thing, take what you need and leave what you don’t. Alicia tells him that she is going to come after him, Logan says that is the attitude he doesn’t like and now instead of helping other people, looks like they are going to have to help themselves.

Victor is with Jim, Sarah and Wendell; he knows he should have been on that plane and plans on finding everyone.

John tells June that he thinks they are the lucky ones, they have survived. June hugs him and tells him that she didn’t think anyone could help her, until him. June kisses John.

Alicia is out killing walkers and Morgan walks up. She tells him that they could have died, Luciana could have died. People they came for, took what they had back home. The kids ran from them. They can’t make up for the past if they are dead and this is stupid. Morgan tells her that if they are there, they need to make it mean something. Morgan says he is going to keep looking for the kids.

Alicia tells him that it shouldn’t be this hard, Morgan reminds her that they are still there and need to keep at it.

Victor watches one of Al’s videos and it just makes him more confused when he sees who it is that she was interviewing.

Al is out and finds a walker trapped, she goes and searches him, finds a map and other items on him; she calls Morgan and tells him that he is right, there is a story here when someone zaps her from behind and knocks her out.