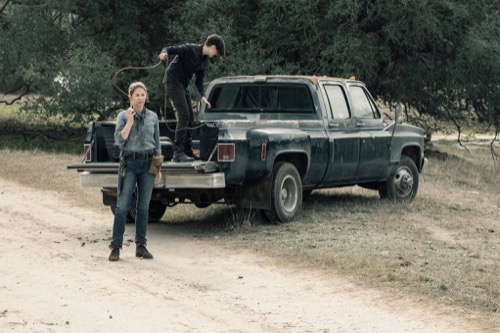 On AMC tonight Fear The Walking Dead (FTWD) airs with an all-new Sunday, July 14, 2019, episode and we have your Fear The Walking Dead Recap below! On tonight’s FTWD season 5 episode 7 called, “Still Standing,” as per the AMC synopsis, “Strand and Charlie seek safety; Dorie helps Dwight on his quest; Morgan stays focused on the greater mission; Alicia refuses to give up.”

Looking for Annie, Max, and Dylan, Alicia cuts the ropes holding back the wall of walkers and takes them down one by one. Meanwhile, Charlie tries to keep the walkers moving away from Victor as he gets to the propeller. Morgan continues to radio to them to warn them of the contamination. June radios in to tell Morgan she is on her way.

Morgan goes into a car and finds protective gear. He heads into a house. He looks for keys while talking to Alicia. She tells him about the kids. He tells her to keep trying. They are all getting on that plane.

June and Al work to get fuel for the plane. June finally talks to John to tell him about the second reactor blowing. She tells him to hurry. His radio goes out. He tells Dwight they need to get going. Dwight wants to continue to look for Sherry. John holds the letter in his hand from her to Dwight but doesn’t give it to Dwight.

Morgan comes to save Victor and Charlie from the walkers surrounding them. As Annie reties the wall of walkers she tells Max they aren’t going with Alicia. Just then several walkers get free. They run for it.

Alicia finds Dylan’s drawings of his nightmares when it all began. He tells her he was scared but Annie used his dreams to protect them. Alicia explains how she was scared of the dead and the living.

Grace tries to fix the generator but it blows. Morgan radios just then. She tells him they have about 12 hours to a day. She will meet him at the truck stop. Still suited up, Morgan tells Victor and Charlie to go shower and finish the plane. He needs to go to Grace.

June still cant in touch with John. She tells Al she lost him once and she won’t do it again. Al breaks down and tells June about when she was missing and how she met someone. She felt something she hadn’t felt in a long time. But she can’t see this person again and she is having a hard time coming to terms with that. June doesn’t have words to make it better. She chose to focus on being grateful for meeting John even if she thought she would never see him again. She believes Al will see this person again.

The walkers start to try and push down the walls of the kids camp. Alicia wants her weapons back. She can help. Dylan and Max beg Annie. She finally hands it to Alicia. They make a run for it. Alicia gets to work picking off the dead one by one.

John and Dwight try to hotwire a mack truck. John gets upset but Dwight stays upbeat. John confesses he lied and gives Dwight the note from Sherry, telling him he is sorry. Dwight reads it and then gets out of the truck.

Morgan finds Grace. Alicia works on the walkers while the kids get to a safe. A particularly walker has Alicia trying to pull her knife out. Blood splatters everywhere on her face and in her mouth. She realizes the walker is contaminated after. The realization makes her pause. She radios to the kids. She can’t keep all of the walkers back. They finally agree to get on the plane.

Back at the truck stop, Morgan tells Grace about Eastman and how all life is precious. Meanwhile, Victor and Charlie make it to Luciana. They get to work. All the kids show up just then. They tell Victor and Luciana that Alicia is still out there. She walks in the dark as a heard follows her.

In the dark, John finds Dwight. He understands why he is mad. Dwight gets it, to keep him going. But he isn’t going to stop looking. For now, though, he plans to help John find June. Maybe that will help him.

Morgan radios to Alicia as she bends at a stream to clean her face. She tries to sound upbeat and doesn’t tell him what happened. He asks her why she is. But she doesn’t answer. Just then alarms fill the sky. Grace confirms its the reactor.