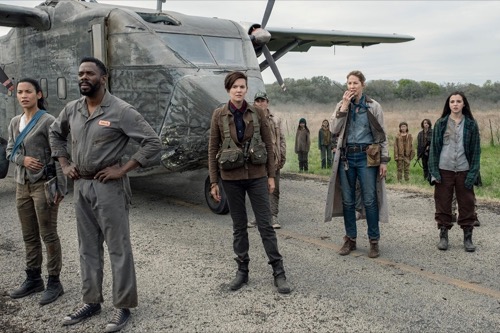 On AMC tonight Fear The Walking Dead (FTWD) airs with an all-new Sunday, July 21, 2019, episode and we have your Fear The Walking Dead Recap below! On tonight’s FTWD season 5 episode 8 called, “Is Anybody Out There?,” as per the AMC synopsis, “Up against the clock, Morgan, Grace, and Alicia work to buy time.

Dorie and Dwight race against the elements; Sarah and Wendell get help from an unexpected source.”

Morgan, Strand, and Alicia all call out on the CB radio to see if somebody else is out there. Everyone else joins in, saying what they can to join up with others. Alicia walks in on Morgan and tells him maybe they cannot make up for what they did, maybe they are the last ones left. Morgan says it just can’t be. Alicia tells him to take a break. All of a sudden, when Morgan leaves somebody is on the radio, Morgan runs back in with Alicia, the guy on the other side’s name is Logan. Morgan asks him where he is.

Logan is in a tower, he is called down by some other people who say they have searched every hole possible and if he doesn’t tell them where it is, the next hole will be for him.

Alicia is in the decontamination shower, removing the blood from her body. She looks so relieved to be clean, but she doesn’t know if she is infected yet.

She hears someone calling her name, the water is almost out. There is a siren going off, Grace tells Alicia she needs to hurry up, tons of walkers are on their way. Morgan sees them coming, he radios Luciana but she has nowhere for Morgan to lead them, neither does June.

June is working on the plane with Dylan. She tells him that she has seen a lot of bad, she knows he has too, but there has to be more than that, it just doesn’t add up. Dylan agrees there has to be some good coming for them.

John and Dwight are outside a car dealership and trying to find one that they can start. John starts an SUV, they are on their way.

Meanwhile, Morgan, Alicia, and Grace are driving, he tells Alicia that when they get of here, he wants to show her his exercises, they can maybe help her as they helped him. They stop the car and hold out for a while. Just when they think the walkers are gone, a new batch of them comes up. Morgan radios Luciana and tells her the walkers are on their way.

Sarah is driving her rig, she comes face to face with Logan. He tells her to remove her rig, she asks him what happened to take back what was his. Sarah tells him that they rebuilt the plane and need a way to light up the runway. He says he doesn’t operate like that, he doesn’t help. She says that the rig belonged to his friend Clayton, and not a day goes by that she doesn’t regret what she did. She goes on to say that if he doesn’t help now, he will spend the rest of his life regretting it, he owes it to them and to Clayton. Logan says he didn’t like his partner, and he is not sticking his neck out.

John and Dwight’s SUV stops, it has a full tank of gas. John looks off the distance and sees a fire. June calls him on the radio and asks if he is getting closer. Everyone is looking at the same thing. June asks where he is, she will come to get him. He says he is going to do his best to get back there but she has to promise to take off whether he returns or not. He then says from the moment he set his eyes on her, he knew he had a reason to live.

John tells June he loves her before they lose reception. Dwight tells him that he is sorry. They both look at a tree that reads, if you are reading this then you are still here.

Dan brings some things to Wendell to help out.

Strand and Al got the plane going, they call for everyone else to get going. Alicia is in there now too. Al tells Morgan that if they don’t leave now they won’t have enough fuel to get over the mountains. Morgan counts, June says that she made John a promise. Morgan tells everyone to run and get in the plane as fast as possible Morgan tells Strand that when he tells him they have to go. All of a sudden, John and Dwight drive up, they run towards the plane. Everyone is inside and hundreds of walkers are behind them. Three walkers are attached to a net behind the plane, Al screams that they have to lose the dead weight now. The plane is up in the air, they make a sharp right to level things out. John tries to calm everyone done and tells them they’ve got this. Things calm down and everyone takes a deep breath.

June and John are so happy to be together, John professes his love and asks her to may him. The two are so happy and you can’t help feel bad for Dwight, who looks on sadly missing his own wife.

Dan, Wendell, and Sarah are lighting up the runway for the plane. Wendell looks in his mirror and sees a walker, he backs into him and kills him. Just then another one comes on Wendell, he shoots him and the lights go off on the runway. Sarah heads the shot and calls for Wendell. In the plane, they are running out of gas. Wendell throws himself to the ground, he tells Sarah that if he doesn’t make it out alive, he loves her. Al tells everyone to hold on, she is going to land blind. Wendell is dragging himself to the runway and manages to plug back in the lights just in time, they land safely.

Morgan and the gang exit the plan. Dan, Sarah, and Wendell are there to greet them. Sarah gives Morgan a big hug. Dan and Morgan shake hands. Dan says to Al, I told you not to show my interview to anyone; they both smile. Morgan congratulates John and June. Dylan gives Luciana back the book, he tells her that it helped him a lot.

Sarah asks who is hungry.

Alicia sees Dan and she runs to him, he tells her that he is sorry about what happened. She says she is too. She introduces Dan to Dwight.

Dan tells Strand that he was wrong, Stand says we all are sometimes.

Someone is on the radio, asks Morgan if it was his plane flying over. She says she has seen the boxes, she didn’t think it was real but she needs help. Someone interrupts and says that he is sorry, but they need to chat. Logan drives up, Morgan is angry and asks what he is doing there. Logan makes them a proposition. He says the reason they needed a plane to cross the mountains, and things are only going to get worse. Logan says he knows that Clayton wrote a journal where this is gasoline and if they give it to him, he can help them find it. Alicia asks why should they trust him, he says he has things to make up for.