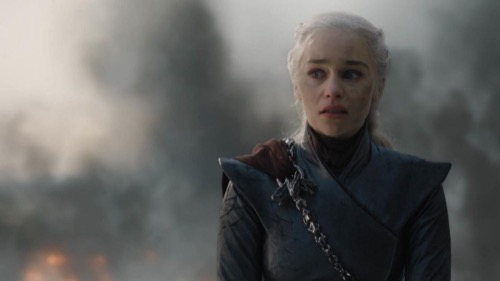 Tonight on HBO, Game of Thrones is back with an all-new Sunday, May 19, 2019 season 8 episode 6 series finale and we’ve got your Game of Thrones recap down below! On this evening’s episode as per the HBO synopsis, “After eight season the series finale of GoT is here.  The show depicts two power families, Kings and Queens all vying for the iron throne.”

Ash floats through the air with fires burning all around. Tyrion walks, taking in the devastation. Jon and Davos walk behind him. Tyrion tells them he will find them later. Jon wants to send some men with him. It isn’t safe, but Tyrion wants to go alone. Across the Capitol, Jon and Davos come up upon Grey Worm. He has some of Cersei’s men lined up ready to kill them. Jon tells him, no, but Grey Worm tells him it is his queen’s orders. Ready to fight, Davos stops them both. He and Jon need to speak with Daenerys. They head to find her.

Tyrion walks through the rubble of the Red Keep. He heads to the tunnels. Light comes through a small opening at the top of a pile of rocks and rubble. In a nearby pile, he sees Jamie’s hand. He starts to pull of bricks, exposing his face and then Cersei’s. He cries as he uncovers them.

Arya spots Jon as he makes his way to see Daenerys, past her army and up the stairs. Drogon screeches overheard. Daenerys comes to the top of the stairs to address all of the soldiers. She thanks them for their fight and loyalty. She appoints Grey Worm her Master of War. They must continue to fight to free the world. Tyrion and Jon watch scared and concerned. Tyrion steps to her side. She knows of his treason. He, in turn, comments on her slaughtering an entire city. He takes off his pin and throws it. She has her men take him away. As Tyrion is brought away, Daenerys and Jon make eye contact before she walks off. Arya arrives at his side. Arya warns him that he is a threat to Daenerys and she knows a killer when she sees one.

Jon arrives to see Tyrion. He asks Jon about life after death. He admits he chose his fate, betrayed his queen, and he would do it again after what he has seen. Jon tells him the war is over. Tyrion doesn’t think so. They argue about how far Daenerys has gone, burning down the city and all of the innocent people.

Tyrion points out that she will continue to kill, taking out the innocent, to fight the enemy. He loves Daenerys and he knows Jon does too, but she is a threat. Jon is sorry it all came to this. He heads to the door. Tyrion brings up Sansa and Arya, will they bend at the knee? Jon needs to choose now.

Daenerys heads to the Iron Throne. She stares at it with excitement. Just as she turns to sit, Jon arrives. She begins telling him a story about what she was told by her brother about the throne when Jon gets angry about Grey Work killing in the streets, children burned and Tyrion. She cannot give little mercies. It is all for the greater good. He wonders if that is how it should be. She urges him to see she is right and that they should be together. She kisses him, he kisses her back, stabbing her. He lay her down as Drogon comes to their side. Drogon cries after he sniffs Dany, realizing she is gone. He becomes angry and breaths fire on the throne melting it before he takes her body away. Flying into the sky.

Time has passed. A gaunt-looking Tyrion is brought out of his cell, walked into the yard by Grey Worm. He comes face to face with all of the rulers of houses; Davos, Arya, Sansa, the Lovejoys and more. They want to know where Jon is. Grey Worm knows Jon killed Dany and they will find him. He cannot go free. Davos pleads for peace. They don’t even have a king or queen. Tyrion tells them to appoint one. They discuss it. Samwell mentions maybe letting all of the people decide. They all laugh. Tyrion has had time to thinks in these last weeks. Bran should be the king. He has overcome so much and watched more. He is a keeper of memories.  Tyrion pleads for him to wear the crown. He will. They all vote for Bran, one by one. Sansa believes in him but the North will remain independent and free. He agrees. They appoint him the king.

Bran asks that Tyrion be his hand. He doesn’t want it. Bran insists he spends the rest of his time trying to right his wrongs.

Later, Tyrion meets with an enslaved Jon. Bran has sentenced him to the Night Watch. Jon questions what he did to Dany. Was it right? Tyrion is still not sure.

Jon is brought to the boat to head to Watch. He sees Grey Worm who is headed to Naath. They exchange looks. Jon meets with Sansa, Arya and Bran before he leaves. He hugs them all. Sansa will continue to champion for the North, Arya is headed west of Westeros. He kneels before Bran, apologizing for not being there for him. He was where he was supposed to be. They all watch him leave.

Brienne sits with inks and pen, filling out the history of the knight who died. She begins with Jamie.

Tyrion sits at the table. He gets up and straightens them all before sitting back down. Davos and the others arrive, messing up the chairs. A book has been released. The Bronx laughs that Tyrion isn’t mentioned at all. Bran comes to meet his new cabinet of Davos, Samwell, Brienne, Bronn and Podrick. They all have a lot to plan and fix.

Jon arrives at the wall to see Tormund.

Jon visits his people and his dire wolf. Sansa is crowned Queen of the North. Arya sails West. Jon and Tormund travel beyond the wall.