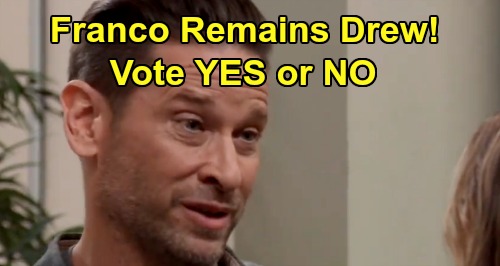 General Hospital (GH) spoilers tease that Elizabeth Baldwin (Rebecca Herbst) will remain determined to get her husband back. Of course, that’s easier said than done! If the memory procedure could even be pulled off safely, there’s still the matter of convincing Franco Baldwin (Roger Howarth) to sign up. That’d be a tough task since Franco is perfectly fine with the man he believes himself to be: Drew Cain (Billy Miller).

Franco was a sadistic serial killer and sexual predator, so several Port Charles residents naturally hate him for his past. Many “JaSam” fans haven’t forgiven Franco for what he did to Jason Morgan (Steve Burton) and Sam McCall (Kelly Monaco). GH has worked hard to redeem Franco, but it’s not enough for some viewers.

Sam and Jason recently acknowledged that Franco was better off remaining Drew, a heroic Navy SEAL and all-around great guy according to his background. Should the show let Howarth stick with his new role? Should he play Drew Cain pre-2012 permanently instead of Franco?

Franco may have no emotional attachment to Drew’s memories, but you certainly can’t tell. Howarth’s version of Drew is fun to watch. “FrankenDrew” as some viewers call him seems emotionally invested in his memories. Franco is convinced that he’s Drew Cain and has the reactions fans would expect from Drew. He’s showing Drew’s true feelings for Kim Nero (Tamara Braun) as well, so there are plenty of places to go with this character.

Howarth Should’ve Been a New Character

Howarth is an amazing actor and arguably should’ve been a new character from the start. Once Todd Manning exited the scene, Howarth could’ve been Drew instead of bringing Franco back from the dead. General Hospital could’ve introduced Franco’s good twin instead of a “reformed” serial killer.

Howarth could’ve even been Drew since his arrival and the way he was written into the story would have made sense. Since Howarth is quite talented, it’s a shame to see Franco’s dark history interfere with some fans’ view of the character. Howarth faced an uphill battle from the get-go, but maybe there’s still a chance to make things right. Could having Howarth stay Drew be a fix here?

Franco Wanted To Forget His Past

GH viewers know Franco wanted to escape his past. Franco’s crimes can’t be erased, but his memory of those crimes has now been wiped out. He also doesn’t remember being molested as a child, so that’s another good reason to remain Drew. Franco’s free from his regrets and the darkness that’s been weighing him down. The only issue is that Franco has forgotten his love for Liz.

However, there’s a fix for that, too. Drew could fall for Liz, which would keep the onscreen pairing of two actors that really click. Howarth and Herbst work well together and make a believable couple. It’d be fun to watch them transition from “Friz” to “Driz” and explore a new chapter.

Still, there are some Franco and “Friz” fans out there who would miss the real deal. What do you think about Roger Howarth’s portrayal of Drew? Should GH keep him as Drew now that Billy Miller is departing or do you prefer Franco?