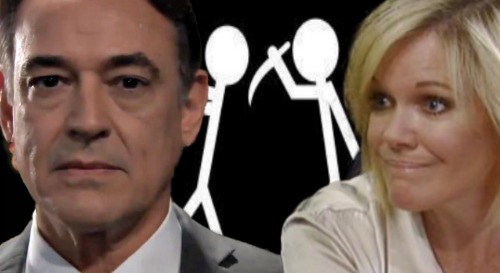 General Hospital (GH) spoilers tease that Ava Jerome’s (Maura West) rage toward Ryan Chamberlain (Jon Lindstrom) will grow stronger. She got some breathy phone calls and assumed she was being harassed by her murderous ex. After the PCPD traced the info on Ava’s phone, she was told they were merely robocalls. However, Ava doesn’t seem to buy the idea that Ryan’s done with her.

Ryan’s a smart guy, so he may have found some way to disguise his contact efforts. Regardless, GH fans can expect more eerie incidents soon. Ava was unsettled by Ryan’s apparent behavior at first, but she eventually decided to take a stand. She informed Julian Jerome (William deVry) that she’d be ready if Ryan came for her, but she may take it a step further than that.

After Ava faces another round of strange occurrences, she may get fed up with the whole situation. Ava has already been through so much thanks to Ryan, so she may think he’s got some nerve tormenting her like this. This fierce Jerome may choose to take matters into her own hands.

Since when has Ava waited around on an enemy to come after her? She’s the kind of gal who strikes first in a fight, so she just might do that with Ryan. If Ryan keeps calling or finds other ways to get in touch, Ava could easily set a trap. She could pretend she misses Ryan and argue that they could still have a future together. Ava could suggest that she loves Ryan’s dark side to lure him out of hiding.

General Hospital spoilers say Ava will refuse to retreat on April 12. She’ll be determined to stick to a plan and not cower in fear. Will Ava be gearing up for a final showdown with Ryan? Her life is a mess these days, so she doesn’t feel like she has much left to live for. Ava may think the risk is worth it if she has a shot at avenging Kiki Jerome’s (Hayley Erin) death.

The harder Ryan pushes, the more determined Ava will be to destroy him. Ava just might be the one to truly kill Ryan and end this nightmare permanently. General Hospital spoilers say Ava could become unhinged, but maybe that’s necessary. She’ll have to lose all control if she hopes to ever gain any of it back!

It sounds like Ava will get her chance to turn the tables and make Ryan a deadly victim. We’ll give you updates as other GH news comes in. Stay tuned to the ABC soap and don’t forget to check CDL often for the latest General Hospital spoilers, updates and news.