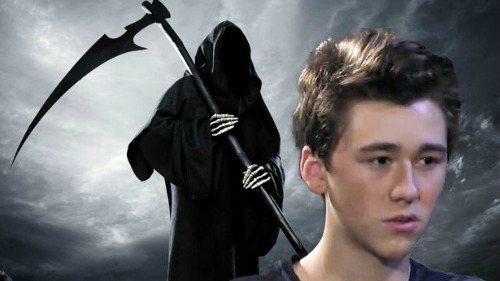 General Hospital (GH) spoilers tease that Oscar Nero’s (Garren Stitt) tumor storyline is closing in on its expected conclusion, but that doesn’t make it any easier for fans. Things are really getting dark at this point. Oscar was visibly weak as he left GH to get cookies from Eckert’s with Josslyn Jacks (Eden McCoy) and Cameron Webber (William Lipton). He’s clearly trying to put on a brave face for them.

The somber tone was already set when Cam suggested another road trip and learned Oscar couldn’t take anymore. That certainly limits his bucket list. There are so many experiences Oscar will never get to have and sights that he’ll never get to see.

Joss also brought up the idea of a Nurses Ball performance, but Oscar reminded her that it’s still weeks away. Even if Oscar survives that long, it’s doubtful he’ll have the mental capacity or physical strength to perform on stage. Josslyn knows this deep down, but she seems to think it’s best to keep pretending. She’s not in denial, but she wants to find some level of normalcy in the midst of all this.

General Hospital spoilers suggest another major setback will hit for Oscar during the week of April 1-5. This dark storyline should be pitch black by then! Monica Quartermaine (Leslie Charleson) brought up palliative care, so that’ll be something Oscar needs soon. GH viewers will have to watch as Oscar slips away little by little.

Many fans were hoping for a miracle, but insider buzz has always suggested we wouldn’t get one. Now General Hospital spoilers are backing that up. If Dr. Terry Randolph (Cassandra James) and Monica believe the fight is over, GH fans have to accept it, too. However, that doesn’t mean we have to like it!

Now that Oscar’s death is suddenly feeling very real and imminent, what are your thoughts on the storyline? Is this just too heartbreaking, especially since it hasn’t been that long since the well-liked Kiki Jerome (Hayley Erin) died? Dante Falconeri’s (Dominic Zamprogna) exit is awfully dark as well, so the timing of Oscar’s decline couldn’t be worse.

Oscar’s deadly departure is undoubtedly too sad for many viewers out there. Are you one of them? We’ll give you updates as other GH news comes in. Stay tuned to the ABC soap and don’t forget to check CDL often for the latest General Hospital spoilers, updates and news.