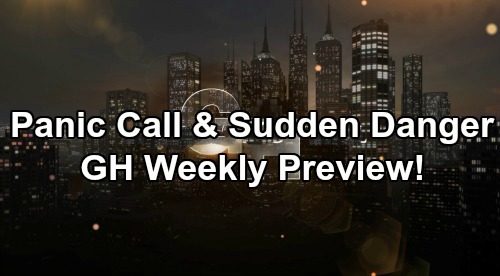 General Hospital (GH) spoilers for the week of April 1-5 tease that disaster will strike for a few Port Charles residents. Drew Cain (Billy Miller) and Dr. Kim Nero (Tamara Braun) will get some alarming news, which most likely involves Oscar Nero’s (Garren Stitt) health. Josslyn Jacks (Eden McCoy) will contact Carly Corinthos (Laura Wright) soon after, so she may be a mess after Oscar’s rapid decline.

It sounds like Oscar will have debilitating seizure, which means we’re really nearing the end now. General Hospital spoilers say Oscar will grow weaker and less aware of what’s going on, so his march toward death is going to be brutal. Meanwhile, Lucy Coe (Lynn Herring) will provide some support. She may reach out to Dr. Kevin Collins (Jon Lindstrom) and let him know he’s got someone in his corner.

Over with Elizabeth Baldwin (Rebecca Herbst), she’ll have a heart-to-heart with Bobbie Spencer (Jacklyn Zeman) and gain some valuable advice. Liz has been worried about poor Aiden Webber (Jason David), but maybe Bobbie will have some tips for this concerned mom. Next, Kristina Corinthos-Davis (Lexi Ainsworth) will run into some trouble. She’ll make a move that leaves her in over her head.

Right around the time that Kristina goes too far, Michael Corinthos (Chad Duell) will seek out Sonny Corinthos (Maurice Benard). Will that involve getting Kristina out of a troubling situation? At GH, Alexis Davis (Nancy Lee Grahn) will help fulfill Dr. Gail Adamson’s (Susan Brown) final wish. She’ll coordinate a gathering, which will bring Dr. Lesley Webber (Denise Alexander) back to town.

Scott Baldwin (Kin Shriner) will also receive a special message as General Hospital celebrates its 56th anniversary. You can check out some fun reunions and flashbacks on Tuesday, April 2. Over with Willow Tait (Katelyn MacMullen), she’ll get a warning. It seems likely this will be from Shiloh Archer (Coby Ryan McLaughlin), but we can’t rule out Nina Reeves (Michelle Stafford) either. She’s always around to add to Willow’s list of problems.

Other General Hospital spoilers say Maxie Jones (Kirsten Storms) will deal with some complex feelings. She’ll have a battle going on in her heart, so she might be torn between Chet Driscoll (Chris Van Etten) and Peter August (Wes Ramsey). Speaking of Peter, he’ll turn to Anna Devane (Finola Hughes) for guidance this week. It’ll mark a major shift in their relationship, so Anna will be thrilled.

However, it won’t be long until Anna has to face the facts. Peter is almost certainly Alex Devane’s (Finola Hughes) son instead, so the countdown is on to that revelation. Finally, Valentin Cassadine (James Patrick Stuart) will lie his way out of a tricky situation. That’s not surprising since Valentin has created an intricate web of deceit, which will inevitably fall apart sooner or later.