General Hospital Spoilers: 2 Weeks Ahead – Josslyn Melts Down Over Oscar’s Death – Rips Into Cam as Her World Falls Apart 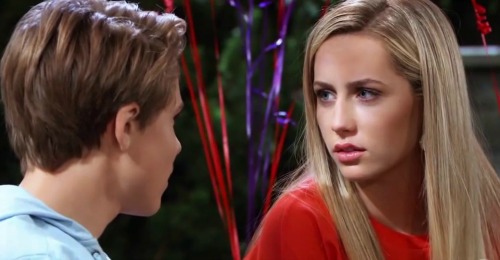 General Hospital (GH) spoilers tease that Josslyn Jacks (Eden McCoy) will feel like her world’s crumbling down. She’ll be a wreck over Oscar Nero’s (Garren Stitt) rapid decline, so her emotions will come out in many different ways. Naturally, there’ll be plenty of tears as Joss braces for Oscar’s death. She’ll be deeply saddened, but there’ll also be moments where rage takes over.

Joss desperately wishes there was something she could do for Oscar. She hates the thought of losing him, but it’s happening right before her very eyes. Since Josslyn can’t change Oscar’s fate, he’ll leave her feeling frustrated and furious. Unfortunately, it seems Joss will take her anger out on Cameron Webber (William Lipton).

On April 24, General Hospital spoilers say Josslyn will blast Cameron. She’ll rip into him with everything she’s got, but the reason why isn’t evident just yet. It’s possible Cam will have a hard time visiting Oscar when he’s like this. If he keeps his distance, that might be a reason for Joss to lash out.

Then again, Cameron may not do much of anything at all. Like we mentioned, Josslyn will be in a highly emotional state. She’ll barely be able to think straight as she deals with this nightmare, so it’s easy to see why Cam would face her wrath. Joss may end up blasting just about everybody as Oscar’s death draws near.

Sometimes it’s easier to feel anger than it is to feel sorrow. Oscar’s brain tumor isn’t anyone’s fault, so it makes sense for Joss to find blame where she can, even if it’s not justified. General Hospital spoilers say Cameron will likely try to be understanding and patient. He’ll get that Joss is going through a rough time, so he may take what she dishes out and offer comfort later.

GH fans can expect some tough moments as Oscar’s final days get closer. The end of this storyline is sure to be brutal, but the show’s been building to it for a while now. General Hospital spoilers say they’ll hopefully deliver a satisfying conclusion.

It sounds like some gripping episodes are on the way. We’ll give you updates as other GH news comes in. Stay tuned to the ABC soap and don’t forget to check CDL often for the latest General Hospital spoilers, updates and news.