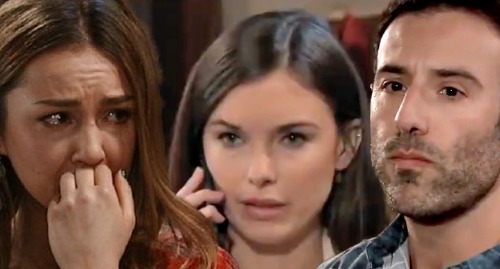 General Hospital (GH) spoilers reveal that Michael Corinthos (Chad Duell) is doing everything he can to help his sister, Kristina Corinthos-Davis (Lexi Ainsworth). He recently asked Willow Tait (Katelyn MacMullen) to speak with Kristina about her Dawn of Day experiences. Michael’s hoping Willow can turn Kristina against Shiloh Archer (Coby Ryan McLaughlin), but is that possible at this point?

Kristina’s mind may be too poisoned for Willow to get through to her. Willow understands better than anyone just how deeply involved someone can get in DoD. When she joined “The Trust,” Willow considered it an honor to be chosen by Shiloh. She was in the same boat Kristina’s in right now.

It wasn’t until much later that Willow finally saw the light. She took classes away from Dawn of Day and the distance helped her see Shiloh for who he really was. Now that Willow can wrap her head around the horrible path she took, she can share that experience with Kristina and try to make her understand.

Sadly, General Hospital spoilers say there’s no guarantee Kristina will listen. Willow probably wouldn’t have listened if she’d been in Kristina’s shoes. When Willow was so immersed in DoD, nothing could change her mind about Shiloh and her future in the community.

Like Willow did once upon a time, Kristina also believes being chosen by Shiloh is an honor and that no one should question her decision. Kristina refuses to buy the idea that Dawn of Day is a cult or that Shiloh takes advantage of the young women in the group.

She thinks Shiloh is honest, enlightened and truly wants to help people. Criticism of Shiloh is something Kristina just can’t handle.

Kristina is so taken in by Shiloh’s charisma that no one in her family can shake some sense into her. She’s threatening to file charges against everyone involved in her rescue because she’s that brainwashed.

Jason even grabbed the cup that Kristina drank out of to prove she was drugged, but Kristina probably won’t believe that either. GH fans know Sam is the only family member that Kristina hasn’t cut off besides Michael. When her sneaky involvement comes out, Kristina will disown her as well.

Unfortunately, Willow’s son, ‘Wiley,’ is dead, and the truth would have to come out about Jonah Corinthos for any of this to be proven.

Will Willow use the fact that she had a child by Shiloh to save Kristina from a similar fate? Will Kristina admit to the truth about Shiloh then? If Willow indeed gives this a shot, General Hospital spoilers say she’ll have her work cut out for her!