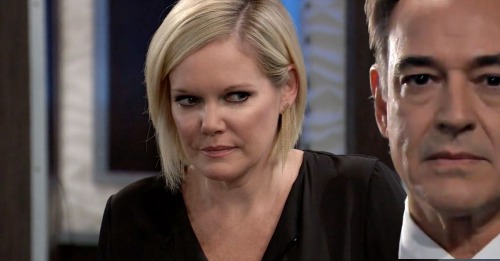 General Hospital (GH) spoilers reveal that Felicia Scorpio (Kristina Wagner) and Laura Webber (Genie Frances) have advised Ava Jerome (Maura West) about a new strategy. They believe the best way to draw Ryan Chamberlain (Jon Lindstrom) out of hiding is to flaunt a new relationship. That means Ava’s going to need a fake boyfriend, but who’s it going to be?

Scott Baldwin (Kin Shiner) has had feelings for Ava since the first time he defended her in a case and still does. He was upset over Ava’s engagement to “Kevin” and has offered sympathy in the aftermath of Ryan’s exposure. There’s a nice bond between them, so they’d make for the most believable option.

Unfortunately, Scott may not be willing to pitch in. General Hospital spoilers say Ava will ask Scott for assistance this week. She’ll face a difficult rejection soon after, so Scott may turn her down for her own good. It’s obviously dangerous to start messing with her serial killer ex, so Scott may urge Ava to leave this alone.

General Hospital execs and writers have been propping Franco Baldwin (Roger Howarth) for years now. Although Franco is married to Elizabeth Baldwin (Rebecca Herbst), he also used to be Ava’s boyfriend, and he’s the man that exposed Ryan in the first place. If Ava can’t convince Scott to get on board, maybe she could rope Franco into her plan. GH might use this as another opportunity to make Franco the hero.

Michael Corinthos wouldn’t be inclined to help Ava under normal circumstances, but Ryan went after several people connected to him. That includes Michael’s ex-girlfriend, Kiki Jerome (Hayley Erin), as well as his cousin and sister-in-law, Lulu Falconeri (Emme Rylan). Of course, Ryan targeted Carly Corinthos (Laura Wright) and her baby, too.

Michael has been awfully busy trying to save Kristina Corinthos-Davis (Lexi Ainsworth), but it’s possible he could take a break and help Ava with her scheme. However, we’d say this option would be tough to buy. The goal is to convince Ryan this is legit and make him jealous enough to come out in the open. If he saw Ava with Michael, Ryan would wonder why she was dating the son of her enemies. It could raise major red flags.

If Ava really wants to get this show on the road, Kevin Collins (Jon Lindstrom) would be the ideal person to play her boyfriend. Ryan has always been jealous of Kevin and seeing him with Ava would infuriate him even more. He wouldn’t be able to resist going after Kevin to keep him away from Ava.

Since Ava wants Ryan to show his face again ASAP, involving Kevin is guaranteed to make that happen. Kevin also feels terrible because he got off scot-free after hiding Ryan at Ferncliff. He’d be the first person to step up and try to capture Ryan at his point.