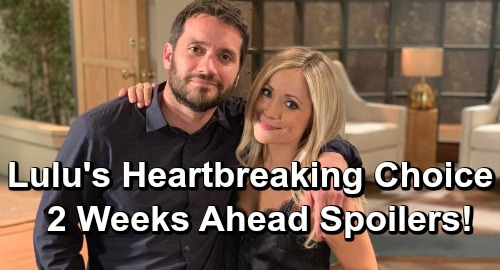 General Hospital (GH) spoilers tease that Dante Falconeri (Dominic Zamprogna) will enjoy a heartfelt reunion with his wife. Lulu Falconeri (Emme Rylan) will certainly get choked up over her hubby’s long-awaited return. She loves Dante with all her heart, so she’ll be grateful he’s finally come back to her.

Dante will be happy about his homecoming as well – at least at first. Unfortunately, it won’t be long until Dante’s plagued with horrific nightmares. The emotional scars of what he’s been through will have a lasting effect. Raj Patel (Noshir Dalal) is dead, but that doesn’t change the mission Dante’s endured.

Dante admitted he thought he knew the drill. He’s done undercover work before, so he figured he could pull this assignment off just as easily. Sadly, Dante was wrong. He’ll struggle to let go of the awful memories and terrible pain. There’s a good chance Dante will face some panic attacks as he tries to cope.

Naturally, General Hospital spoilers say Lulu will want to support Dante. However, she’s faced intense trauma of her own. Dante may be hesitant to burden Lulu with his problems when she’s been through so much, too. Lulu was nearly killed by evil Ryan Chamberlain (Jon Lindstrom) and blamed Franco Baldwin (Roger Howarth) after a manipulated hypnosis session. It was a lot for Lulu to wrap her head around.

Now Lulu will have to deal with Dante’s suffering, but he’ll take care of that issue by departing again. This will present Lulu with another dilemma. General Hospital spoilers say Laura Webber (Genie Francis) will be heartbroken for her daughter. During the week of April 1-5, Laura will push Lulu to leave Port Charles.

That obviously means Dante will leave, and Laura will urge Lulu to go after him. She wouldn’t be pushing Lulu to leave otherwise. Nevertheless, Lulu has a life in PC. She’s got plenty of loved ones and shares custody of Charlotte Cassadine (Scarlett Fernandez). Lulu can’t just drop everything and run off to wherever Dante goes. He might even check himself in somewhere for help with his mental health.

General Hospital spoilers state that this will be an agonizing decision, but Lulu will have to let Dante go. Emme Rylan recently renewed her contract, so she has to stick around for hot storylines. Since Dominic Zamprogna doesn’t want a long-term stint, this is the best they could do. At least GH doesn’t seem to be killing Dante off – not yet anyway!

Of course, plans could change for Zamprogna or General Hospital down the road. For now, it sounds like they’re going with haunted Dante needing time to himself and perhaps professional assistance. We’ll give you updates as other GH news comes in. Stay tuned to the ABC soap and don’t forget to check CDL often for the latest General Hospital spoilers, updates and news.