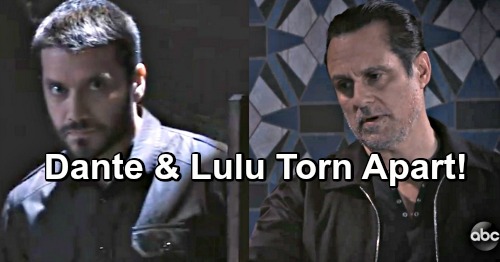 General Hospital (GH) spoilers tease that Dante Falconeri’s (Dominic Zamprogna) comeback will fix one problem, but it’ll create another. GH fans know Dante’s been on a lengthy mission for the WSB. He went rogue, which led to him becoming a hostage in Turkey. Sonny Corinthos (Maurice Benard) finally finds Dante and will be able to save the day eventually, so a “Lante” reunion’s ahead.

After Dante returns home to Lulu Falconeri (Emme Rylan), they’ll enjoy some wonderful scenes together. Lulu will be thrilled to have Dante back by her side, but we know he won’t be sticking around. Zamprogna only signed on for a 10-episode stint, so that’ll leave General Hospital to provide an explanation. They’ll fix Dante’s previous exit, but writing him out this time could be just as problematic.

No matter how sweet this “Lante” reunion is, there’s just no way to keep them together without a recast. Since the show brought Zamprogna back for this return arc, it doesn’t sound like a new actor is even being considered. They would’ve just brought a recast in for this instead if that was the plan.

General Hospital spoilers say there’ll have to be another excuse for Dante’s next departure. Let’s consider the options and how likely each one might be. It’s possible Dante could go to work for the WSB full-time, but why would he after the horror he’s undoubtedly endured? Plus, what would be the point of undoing a bad exit just to give him essentially the same one?

It seems we should explore other possibilities here. Dante might experience a terrible twist of fate when he returns home. He could escape the danger in Turkey only to land in even more danger back in Port Charles. Dante could die saving Lulu or someone else he loves, but it’s safe to say GH viewers wouldn’t like that exit much. No one wants to watch Sonny grieve over lost son constantly.

Still, a deadly departure is a possibility to consider. It would allow Lulu to move on in time, so we can’t rule it out. Of course, a coma might be another route to take. Dante could be seriously injured and end up comatose in some faraway facility. Sonny would undoubtedly score the best doctors who could hopefully bring Dante back someday.

That’d buy GH more time, which would be good since Zamprogna could always return down the road. If not, General Hospital could recast eventually. Either way, they’d have a better exit for right now. Lulu could still fall for someone else, especially if she believes Dante isn’t going to wake up. Dante also wouldn’t be abandoning his family. It wouldn’t be anyone’s fault, so it’s the perfect fit.