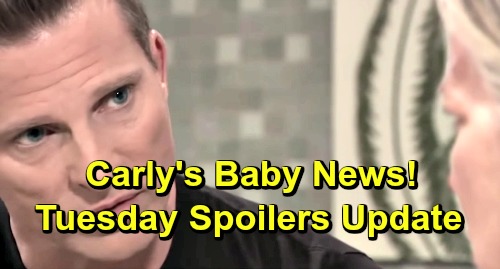 General Hospital (GH) spoilers for Tuesday, March 12, tease that Dr. Kim Nero (Tamara Braun) and Drew Cain (Billy Miller) will check in with their son. He’s been recovering from a seizure, but he’ll be doing much better when they come back around. Josslyn Jacks (Eden McCoy) will also be on hand to apologize for their recent road trip and take the blame for the danger it put Oscar in.

Of course, Oscar made the choice to go along for the ride and leave his parents out of the loop. He’ll accept responsibility, but Kim and Drew won’t be too hard on him. After all, Oscar’s dying! He’s just trying to make the most of the time he has left, so Drew and Kim will offer a deal instead of a harsh lecture. Oscar will happily agree to their terms and they’ll all hope for as many good days as possible.

Over with Carly Corinthos (Laura Wright), she’ll also be hospitalized and treated for her injuries. Naturally, a baby checkup will be necessary as well. Did Carly’s little one survive the trauma of everything Ryan Chamberlain (Jon Lindstrom) put her through? GH spoilers say Carly will find out for sure soon enough.

Jason Morgan (Steve Burton) will support Carly just like she supported him recently. They’ve always got each other’s back. As they discuss the harrowing ordeal Carly endured, she’ll express outrage over Ava Jerome’s (Maura West) actions. Ava walked away when she might’ve had a chance to stop Ryan, so Carly won’t just let that slide.

Jason will get where Carly’s coming from, but he’ll also see Ava’s side of all this. She had no way of predicting what “Kevin” might do next. For all Ava knew, her unhinged fiancé could’ve killed Carly on the spot. It was probably wise to play it cool and not provoke Ryan. Plus, Ava revealed Carly’s location in the end. Jason wouldn’t have been able to get to Carly without Ava’s help, so he’ll cut her some slack.

Meanwhile, Maxie Jones (Kirsten Storms) will gear up for another DNA test attempt. Her first plan didn’t work out, but now Maxie’s positive she’s got Sasha Gilmore’s (Sofia Mattsson) sample. She’ll hope to get that sample to the lab along with one belonging to Nina Reeves (Michelle Stafford). Peter August (Wes Ramsey) will be there for Maxie every step of the way, so they’ll await the results together.

Elsewhere, Valentin Cassadine (James Patrick Stuart) will learn trouble’s brewing. Sasha seemed suspicious when Maxie yanked that strand of hair out, so she’ll bring Valentin in on this. It sounds like they’ll discuss what could be disastrous DNA test results. Valentin will promise to take care of it, but Nina will arrive just in time to realize something’s up.

Valentin may have a moment of panic, but he’ll manage to hide the truth. He’ll invent another problem that needs fixing and keep Nina in the dark on the fake daughter plot. Across town, Brad will try to keep the lid on his own scheme. He swapped his dead baby for Nelle Benson’s (Chloe Lanier) healthy one, so he’s letting Michael Corinthos (Chad Duell) believe his son is dead.

As Willow Tait (Katelyn MacMullen) stands beside Michael, it appears he’ll browse through some pics of “Wiley Cooper-Jones.” Michael will see one that leaves him taken aback, so he’ll point out that Brad’s been holding out on him. This deceived daddy will wonder what else Brad is keeping from him, but his joke will leave Brad worried. The longer Brad keeps this secret, the more anxiety he’ll face.

Afterward, Brad will end up snapping at Willow. He’ll feel like she’s creating unnecessary baby drama, so they’ll bicker and potentially raise additional red flags. It looks like Michael may find himself drawn into this argument sooner or later, which means Brad and Willow may struggle to keep their secrets.

In Turkey, General Hospital spoilers say we’ll see another stop for Sonny Corinthos (Maurice Benard). He’s on a mission to track down Dante Falconeri (Dominic Zamprogna), but he knows he’ll have to go through Raj Patel first. Thankfully, Sonny will find a man who can get the info he needs. With any luck, Sonny will be able to score this meeting and save Dante from brutal captivity conditions.

General Hospital viewers won’t want to miss the hot drama ahead. We’ll give you update as other GH news comes in. Stay tuned to the ABC soap and don’t forget to check CDL often for the latest General Hospital spoilers, updates and news.