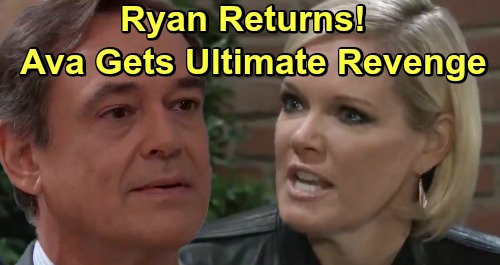 General Hospital (GH) spoilers tease that Ryan Chamberlain (Jon Lindstrom) may have survived the fall from the footbridge. A presumed death is often a setup for a surprising return, so Ryan may come back to take care of some unfinished business. Will Ryan want to whisk Ava away again or go for the kill? Either way, Ava Jerome (Maura West) may get a chance to seek the revenge she’ll soon crave!

Before Ryan pulled her over the footbridge, he told Ava he was sorry they wouldn’t get their happily ever after. However, he thought a happy ending was possible. That’s why he tried to yank Ava down with him in an apparent murder-suicide attempt.

Looking back at Ryan’s GH history, he faked his death successfully and returned at least twice before. If he hadn’t been held captive in Ferncliff and most likely other facilities before that, he would’ve shown up long ago. Heavy sedation was likely a factor in keeping Ryan away as well. Once Dr. Kevin Collins (Jon Lindstrom) eased up on the drugs and let his guard down, Ryan was given the opportunity he needed.

Now Ryan may once again have the element of surprise on his side. Since everyone will believe he’s probably dead again, Ryan can make another stunning General Hospital comeback. Will Ryan turn against Ava when he returns? They could finally bring in some of Ryan and Felicia Scorpio’s (Kristina Wagner) history here. Ryan was very much in love with Felicia once upon a time…until he wasn’t.

Once Felicia burst the bubble of the illusion Ryan had created, he turned on her. It’s worth noting that Ava is far closer to the perfect woman in Ryan’s mind – at least she was until she started spilling incriminating info. Ryan was taken aback by Ava’s betrayal when she told Jason Morgan (Steve Burton) where to find Carly Corinthos (Laura Wright). Even Ava’s reaction to Carly’s suffering was off-putting.

Ryan might give Ava one more shot at a happy life together, but he may be prepared to murder her if she doesn’t cooperate. Of course, Ryan is the one who’s in the most danger now. Ava knows she’s been duped for months and realizes Ryan was Kiki Jerome’s (Hayley Erin) killer. If Ryan dares to show his face, you can bet Ava will seek deadly vengeance.

Ava has been in shock so far, but her anger will grow later this week. She’ll get drunk and lash out at Kevin after mistaking him for Ryan. By the time Ryan potentially resurfaces, Ava may have enough rage built up to rid the world of her daughter’s murderer!