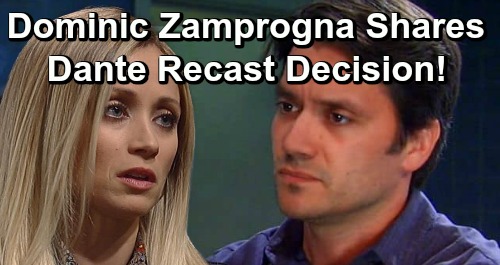 General Hospital (GH) spoilers tease that Dante Falconeri (Dominic Zamprogna) will make a shocking comeback. In the latest issue of Soap Opera Digest, Zamprogna opened up about why he’s making this return. He gives GH fans all the credit for supporting his character and wanting a better story ending for Dante.

Zamprogna noted that Frank Valentini, GH’s executive producer, got in touch with him about a short-term stint to wrap things up. “He felt kind of bad the way we had left things for fans, as far as the character, where he was, why he hadn’t come back, and how he’d sort of abandoned his family” Zamprogna said.

Once Valentini pitched a short-term comeback, Zamprogna decided he was in. He admitted he’s filmed with Maurice Benard (Sonny Corinthos) and Emme Rylan (Lulu Falconeri) so far. Unless Rylan is featured in fantasy scenes, it sounds like Dante will indeed make it home to reunite with Lulu.

What happens after that is still a mystery, but General Hospital will undoubtedly find some way to provide more closure. Zamprogna insisted he’s grateful to loyal GH viewers for all the heartwarming messages he’s received. He’s glad for the chance to come back and make this right.

“I feel like this has probably come about because of the fans,” Zamprogna admitted. He added that if people didn’t care about Dante, GH wouldn’t have bothered. “It’s clear that there’s a lot of love for the character,” Zamprogna said.

Of course, General Hospital could’ve chosen to recast the role when Zamprogna first departed the show. Some viewers might’ve been on board with that idea, but many of them feel like there’s only one Dante. Zamprogna said, “Now, they could have recast, but I would like to think that people wouldn’t have been happy with that!”

It’s a good thing they didn’t since Zamprogna’s Dante will be back for this big adventure, which will include plenty of danger for Sonny soon enough. General Hospital spoilers say the plan to save Dante will come with plenty of excitement, so stay tuned.

Are you ready to see Dante back in action? Are you looking forward to some Lulu and Dante scenes, too? We’ll give you updates as other GH news comes in. Stick with the ABC soap and don’t forget to check CDL often for the latest General Hospital spoilers, updates and news.