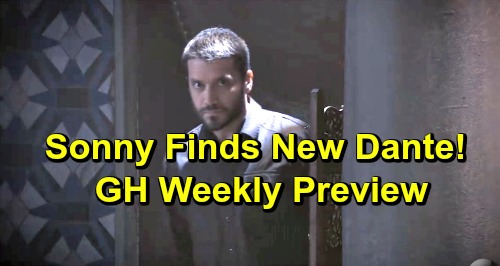 General Hospital spoilers tease that fans have lots of exciting drama ahead the rest of this week on GH! First, Ava Jerome (Maura West) spends a little time with her old friend Franco Baldwin (Roger Howarth). Obviously, she’s been through an extremely traumatic time and probably doesn’t let Franco know she ever doubted his innocence.

Right now, she just needs some support and to vent. Ava’s obviously realized now she was sleeping with her daughter’s killer, and is going through the wringer with anger, despair, and grief. Ava tells Franco she wants Ryan Chamberlain (Jon Lindstrom) found alive, so she can kill him! Franco tries to calm her down as she flies into a rage, but that might not be such an easy thing to do.

Then we see Sonny Corinthos (Maurice Benard) still in Turkey, where he has struck out on his own to find Raj Patel (Noshir Dalal) and hopefully his missing son Dante Falconeri (Dominic Zamprogna). He appears to be talking to a younger man, possibly one of Raj’s underlings, in a warehouse, near some drums and barrels.

In the back of his mind, he’s probably hoping that barrel doesn’t contain the remains of Dante, as viewers might as well. Apparently the younger man gives him a good lead, because next we see Sonny in a different place, apparently an office of some type, with his gun pressed to the shoulder of another man seated, telling him he’s one shot away from an early death!

He cocks the gun, and demands, “WHERE’S MY SON?!” Then he hears someone on the other side of the door, and demands the person to show himself or his boss dies! Then, who should walk through the door but DANTE!

But this appears to be a new Dante in terms of his demeanor – Is he still in deep cover, or has he joined the enemy? Is he even the same Dante who left Port Charles? Stay tuned to GH and keep checking General Hospital spoilers frequently to see how this intriguing situation plays out!