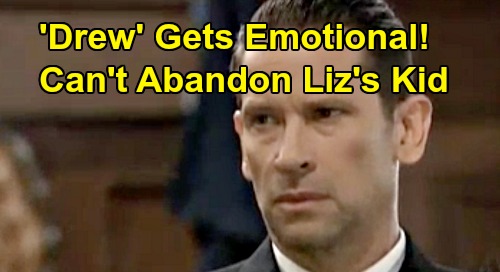 General Hospital (GH) spoilers tease that Elizabeth Baldwin (Rebecca Herbst) will try to give up her dreams for the future. When she said “I do,” Liz thought she’d be building a life with Franco Baldwin (Roger Howarth) and her boys. Now Liz fears Franco’s going to remain “Drew Cain” forever.

After “Drew’s” victory in court, Liz suggested that “Drew” should at least come say goodbye to the family. If “Drew” will do that, Liz is willing to let him go. Of course, General Hospital probably wouldn’t be setting up this farewell scene if it wasn’t significant. Liz’s sons just might be “Drew’s” biggest weakness!

Cameron Webber’s (William Lipton) testimony clearly affected “Drew.” When Martin Gray (Michael E. Knight) pushed Cam too hard on the stand, “Drew” made sure his attorney cut it out. There was also that sweet moment where Aiden Webber (Jason David) came to chat with “Drew” at GH. Liz was grateful for “Drew’s” kindness to the kid. Whose heart wouldn’t melt over adorable Aiden?

The same goes for Jake Webber (Hudson West), who should be part of this upcoming goodbye. He had a special bond with Franco through art, and he just lost the real Drew. Jake thought Drew was his father, Jason Morgan (Steve Burton), for quite some time. He remained close to his uncle after the twin truth came out, so he’s already facing a tragedy. Drew was presumed dead in a plane crash and now Franco’s set to walk out of Jake’s life.

Cameron’s guilt will also rev up since Franco took his place. It’s not Cameron’s fault Shiloh Archer (Coby Ryan McLaughlin) came after him, but that won’t ease his mind. This is just a heartbreaking situation for all of them. However, Aiden may take “Drew’s” farewell the hardest. He went through emotional turmoil at school thanks to bullies and his different interests. Nobody’s been more supportive of Aiden’s baking than Franco. He’s given the kid confidence and strength, but that may soon be ripped away.

It’s easy to imagine Aiden asking why Franco has to go and perhaps even feeling to blame. Aiden was rejected by a lot of his classmates, so he may deal with some abandonment issues here. He understands Franco’s memory issues, but he may wonder if he’s why Franco doesn’t want to remember. GH has the potential to deliver some powerful moments that could change “Drew’s” mind.

General Hospital spoilers say Sonny Corinthos (Maurice Benard) will help Scott Baldwin (Kin Shriner) with a plan to keep Franco around. Franco will also push Kim Nero (Tamara Braun) away, so he won’t be making a fresh start with her somewhere els. Still, “Drew” needs something to push him over the edge and convince him to become Franco again. A heartfelt visit with the “Friz” family just might do it!

Will Liz, Cam, Jake and Aiden tug at “Drew’s” heartstrings? Will this upcoming goodbye turn into a reason to stay? We’ll give you updates as other GH news comes in. Stick with the ABC soap and don’t forget to check CDL often for the latest General Hospital spoilers, updates and news.