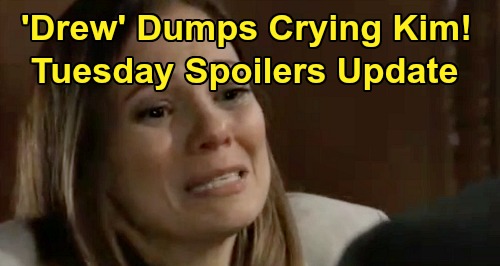 General Hospital (GH) spoilers update for Tuesday, October 29, teases that Scott Baldwin (Kin Shriner) will continue his chat with Sonny Corinthos (Maurice Benard). He just showed up and announced he was there to collect, but Sonny will express a little resistance. Although Sonny has compassion for the “Friz” family and for Scott as a struggling father, Scott will be asking a lot of him.

Nevertheless, Scott will insist he needs Sonny to make this right. GH spoilers say Sonny will agree to lend a helping hand, so they’ll put their plan in motion. Meanwhile, Kim Nero (Tamara Braun) will break down in tears. “Drew Cain” aka Franco Baldwin (Roger Howarth) is now facing doubts about his relationship with Kim, so he’ll explain how he feels on Tuesday.

“Drew” was rocked by Kim’s plot to drug the real Drew Cain (Billy Miller) and force him to sleep with her. The fact that Kim would go that far says a lot about her mental state. Kim may argue that she’s better now, but “Drew” won’t really think so. She just traded her baby obsession for a “Drew” obsession. “Drew” will feel like he’s hindering Kim’s healing and ability to move on with her life.

Kim will be an emotional wreck as she shouts that “Drew” is what’s best for her. She’ll cling to hope for their future, but it looks like “Drew” will break things off. Afterward, Kim will slap Julian Jerome (William deVry) for destroying her dreams. She’ll assume Julian divulged her secret, so she’ll think he deserves every bit of her rage.

Across town, Cameron Webber (William Lipton) will let his mom know he’s sorry. He’ll be stuck on his guilt issues, but Elizabeth Baldwin (Rebecca Herbst) won’t want Cam to worry. She’ll reiterate that Cameron’s not to blame for this terrible situation.

Over with Bobbie Spencer (Jacklyn Zeman), she’ll have some sympathetic words to pass along. Will Bobbie speak with Liz or possibly Scott? Whatever the case, Bobbie will offer a pep talk and a shoulder to cry on.

Next, Alexis Davis (Nancy Lee Grahn) will discuss Sam McCall’s (Kelly Monaco) case with Jason Morgan (Steve Burton). Jason just won’t be certain this bench trial is such a great idea. It’ll mean putting Sam’s fate in one person’s hands, so that’s definitely a risk. However, Sam doesn’t want to be at Pentonville any longer than necessary. It’s hard to be away from her kids, and her cellmate could be lethal!

Alexis may remind Jason of the benefits and argue that Diane Miller (Carolyn Hennesy) knows what she’s doing. Going with a bench trial will bump up the court date, and Diane already confirmed this judge is fair. In the end, Jason will just have to deal with Sam’s choice. She’ll indeed be moving forward with this bench trial soon, so don’t miss what’s in store.

Other General Hospital spoilers say Julian will cross paths with Kendra Lennon (Michelle Argyris), Alexis’ scheming personal trainer. He’ll wonder what she’s up to when he spots her creeping around. Kendra will do her best to avoid stirring up trouble, but Julian’s curiosity could cause problems.

Elsewhere, Maxie Jones (Kirsten Storms) will try to figure out what’s up with Peter August (Wes Ramsey). He’s fixated on Franco’s case, so that’s already been kind of weird. Maxie will grow increasingly concerned on Tuesday, which will bring a confrontation. She’ll push Peter to be honest about what’s going on.

Peter will simply indicate that everything worked out for the best. He’ll feel better since “Drew” isn’t being forced into the memory procedure. Peter will shift to a more pleasant topic and hope that distracts Maxie from this strange obsession. He’ll have a suggestion that could leave Maxie excited or perhaps even more suspicious. It all depends on how Peter handles it!

Of course, Peter should be in for a rude awakening. GH buzz say that at some point, there’s a good chance “Drew” will voluntarily sign up for this memory procedure. “Drew’s” memories could intensify and lead to some secret spillage, so Peter had better be prepared.