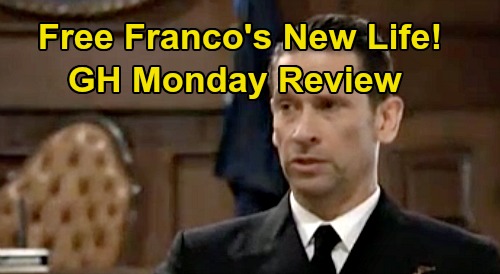 General Hospital (GH) spoilers review for Monday, October 28, reveal that the judge in the matter of Franco Baldwin’s (Roger Howarth) competency hearing handed down a ruling in favor of Franco, which she stated was based wholly on Kevin Collins’ (Jon Lindstrom) medical opinion. Kim Nero (Tamara Braun) was ecstatic about the ruling, yet Franco appeared solemn and pensive about the whole thing. Afterwards, Franco watched as Cameron Webber (William Lipton) stormed out of the courtroom and Scott Baldwin (Kin Shriner) punched Kevin.

Elizabeth Baldwin (Rebecca Herbst) was very discouraged by the ruling, and she told Franco that he couldn’t leave without coming and saying goodbye to “our family” first, and that if he did that, then she’d let him go. Afterwards, Kim and Franco were alone in the courtroom and Kim suggested that they go celebrate, but Franco said that he didn’t feel like it. He noted that he just got what he wanted, but that he doesn’t really know what to do with it. Kim suggested that they go somewhere far away, but Franco looked odd and hesitated, prompting Kim to wonder if there was something left in Port Charles for him.

So, does this mean that Franco is starting to have second thoughts about living his life as “Drew Cain?” It seems that in an instant, as he was watching Elizabeth, Cameron, and Scott melt down, he started to realize just what a profound loss the verdict meant for them. Could he be thinking about voluntarily having the memory procedure? It seems likely, considering that ongoing GH spoilers for this week indicate that Kim is going to be quite upset with him very soon.

Later, Scott went to see Sonny Corinthos (Maurice Benard) at the gym. He told Sonny that “you owe me” and that he needed to collect now. At an earlier point, Scott spoke with Sonny about perhaps capturing Franco and forcing him to undergo the memory reversal procedure, so he may want to discuss that. Or he could simply want Sonny to do something to keep Franco in Port Charles for a while longer. Either way, it seems that Sonny will be willing to help.

Next, Brad Cooper (Parry Shen) and Lucas Jones (Ryan Carnes) headed to their first joint therapy session with Neil Byrne (Joe Flanigan). The session was a bit contentious, with Lucas pretty much immediately voicing his suspicion that Brad is keeping something from him. He pointed out that Brad lied about going to Nelle Benson’s (Chloe Lanier) parole hearing, then he received flowers from an unknown person. Brad did his best to cover and explain both occurrences.

By the end of the session, both men were standing and disagreeing heavily with the other, but Neil interjected and said that this was progress. After the session, Brad and Lucas headed to Charlie’s Pub, where Julian Jerome (William deVry) was miffed with Brad for going to therapy and risking his secret about Wiley Cooper-Jones (Erik and Theo Olson) getting out. During the course of their conversation, Julian suggested to Brad that he change the passcode on his phone, since he was still getting texts from Liesl Obrecht (Kathleen Gati).

But then the next minute, after Brad had stepped away, Julian finagled it so that Lucas noticed that Brad has changed his passcode. Lucas was upset, and this just played into his fears that Brad is keeping something from him. So, why is Julian trying to cause trouble between Brad and Lucas? He’s now sent Brad “anonymous” flowers and staged a scene with the phone passcode. But what’s his end game here? Does he want Brad to be caught?

It seems like Julian would want to protect the secret about Wiley at all costs, given that the truth coming out would mean that Sonny would find out that Wiley is really his grandson – something that Julian won’t want to happen. We’ll see what Julian’s ultimate goal is here, since what he’s doing doesn’t readily make a lot of sense.

“One wonders what’s next… ” #GH pic.twitter.com/uLh44pO5oV