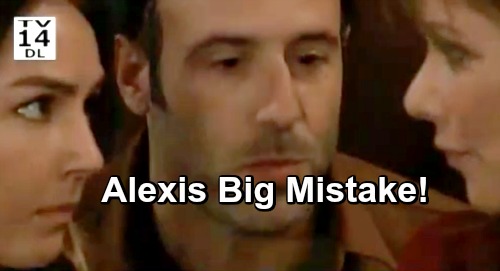 General Hospital (GH) spoilers tease that Kristina Corinthos-Davis (Lexi Ainsworth) will soon get more drawn in to the Dawn of Day (DOD) group. DOD certainly has some of the earmarks of a cult. It’s got a charismatic leader in Shiloh Archer (Coby Ryan McLaughlin), it isolates its members within a common living quarters, and it has a doctrine in the form of Shiloh’s book.

It’s a situation that deeply worries Kristina’s sister Sam McCall (Kelly Monaco) and Jason Morgan (Steve Burton). They can see right through Shiloh and they know that he’s up to no good where Kristina is concerned. Shiloh’s got a past connection to Sam and has connections to too many people that Sam knows for his newfound relationship with Kristina to be a coincidence.

But one person who doesn’t seem to be too concerned about Kristina’s DOD connection is her mom Alexis Davis (Nancy Lee Grahn). She’s heard Sam’s concerns, but so far the alarm bells just aren’t going off for Alexis. Rather, she seems to be pleased that her daughter has found a group of friends and a support system.

Alexis even met Shiloh recently, and the two seemed to hit it off pretty well. Alexis naturally had a lot of questions for Shiloh, but he handled them smoothly and seemed charm Alexis.

GH spoilers say that Alexis will soon attend one of Shiloh’s seminars, and during the process she’ll be forced to look inward and address some of her own issues. It will open some old wounds where Julian Jerome (William deVry) is concerned, and it seems that Alexis will be impressed by how Shiloh’s able to open her eyes to some things.

It certainly looks like Alexis may be jumping on board the DOD train soon. Due to her experience at the seminar, she just might actively encourage Kristina’s involvement with the group. This will likely put her at odds with Sam, given that Sam is decidedly anti-DOD and anti-Shiloh.

But will Alexis’ support push Kristina even further into the group? The more involved Kristina becomes, the more she seems to push the DOD lingo and ideals herself. It sure looks like she’s getting slowly brainwashed, but for what end? If Sam’s right, then Shiloh might have some plan to target Kristina in order to get revenge on her.

Do you think that Kristina’s going to end up brainwashed by the cult of DOD? Stay tuned to the ABC soap and don’t forget to check CDL often for the latest General Hospital spoilers, updates, and news.