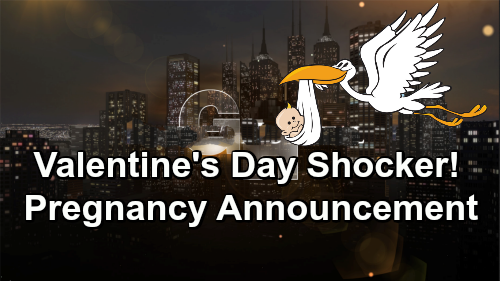 General Hospital (GH) spoilers tease that one couple is about to get a huge surprise. This Port Charles pairing will process some exciting news before making a major Valentine’s Day announcement. It turns out one duo’s expecting a brand-new bundle of joy. The couple will reveal that a baby’s on the way, so it should be interesting to see who’s pregnant.

Let’s consider a few possibilities and try to figure out where GH is headed with this hot plot. One option that immediately comes to mind is Jordan Ashford (Briana Nicole Henry) and Curtis Ashford (Donnell Turner). They tied the knot at Thanksgiving, so they could keep their holiday-themed milestones going with a Valentine’s Day pregnancy announcement.

These newlyweds are still in the honeymoon phase, so they weren’t planning on starting a family just yet. The timing wouldn’t be great since Jordan is so wrapped up in this serial killer investigation. However, Jordan and Curtis would certainly get used to the idea. They would probably welcome the idea of a bun in the oven sooner or later.

There are other options to mull over though. Franco Baldwin (Roger Howarth) and Elizabeth Webber (Rebecca Herbst) have been busy dealing with Aiden Webber’s (Jason David) bullying issues. They also had to contend with Cameron Webber (William Lipton) getting caught up in that botched drug deal. It’d pretty much be a nightmare for them to add a baby to mix right now, but it could happen.

Many “Friz” fans would love to see Liz and Franco have a little girl one day. This could be their chance, but we’re betting it’s not. That’s because Liz will make a huge romantic gesture to prove her love soon. It sounds like they’ll be leaning more in the direction of a surprise wedding.

General Hospital spoilers for Valentine’s Day confirm that one couple will decide to marry. That’d be a good fit for Liz and Franco, so maybe they won’t be the duo that’s expecting.

Of course, Jason Morgan (Steve Burton) and Sam McCall (Kelly Monaco) just enjoyed some steaminess in the bedroom. “JaSam” supporters would love a baby for them, but it’d be cutting it too close on the announcement.

Sam probably wouldn’t have enough time to realize and confirm she’s pregnant. She definitely wouldn’t be ready to share it publicly as this info suggests. We’ll throw in the option of a miracle baby for Nina Reeves (Michelle Stafford) and Valentin Cassadine (James Patrick Stuart), but that also seems doubtful since the fake daughter drama hasn’t played out yet. Nina will be busy with that for February sweeps.

Our pick for this pregnancy is still Jordan, but you may have a different idea! Who do you think will announce this shocking addition? We’ll give you updates as other General Hospital details emerge. Stay tuned to ABC’s GH and don’t forget to check CDL often for the latest General Hospital spoilers, updates and news.