General Hospital Spoilers: Sam and Jason To Have Another Child – Should JaSam Have a New Baby, Bigger Family? 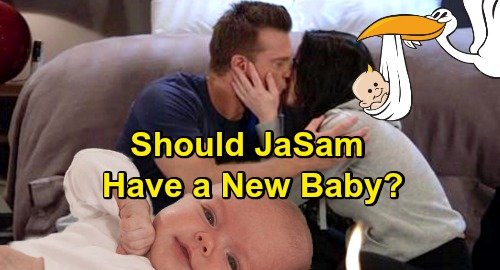 General Hospital spoilers (GH) tease that Sam McCall (Kelly Monaco) and Jason Morgan (Steve Burton) will reunite soon as lovers, and the next logical step would be remarriage. But what might come after that? Should Sam and Jason have another child to cement their relationship?

One big objection to having more kids that Sam has had in the past about Jason is his dangerous work.  however, General Hospital fans know he hasn’t had to be a heavy mob enforcer for Sonny Corinthos (Maurice Benard) for a while. Sonny’s been focused on his coffee business, caring for his father Mike Corbin (Max Gail) and his wife Carly (Laura Wright) lately.

That measure of security, Sonny being a kinder and gentler mobster lately, might make Sam feel a little better about taking the big step of remarriage to Jason and making a home together for another JaSam child. Then again, Scout Cain (Palmer and Poe Parker) was a surprise! So although Scout’s dad is Drew Cain, (Billy Miller) we have some evidence that Sam isn’t always planning.

If Sam and Jason have another baby, that child might be a surprise too, with a possible arrival approximately nine months after Jasam’s upcoming romantic reunion! Since Jason missed out on most of Danny’s (TK Weaver) babyhood, he will probably be thrilled to be a daddy to a new little one.

Danny and Scout will probably be excited as well. Sam and Jason have already done some private investigation type work together on several occasions, such as Carly’s rescue from Ferncliff.  General Hospital spoilers indicate that their present investigations into Shiloh (Coby Ryan McLaughlin) and the DOD group might keep them distracted for a bit.

Sam’s concern for Kristina and her own misgivings about her past could easily consume JaSam right into this Summer 2019. These activities have not appeared to cause any interference in Danny or Scout’s lives, or their care or welfare. So while Sam’s style may be cramped a little during another pregnancy, there shouldn’t be too much reason to not have another child, planned or unplanned in terms of GH storylines.

A new baby should do nothing but make Sam and Jason’s relationship even stronger than it is now. Do you think that a Sam pregnancy with Jason would be good idea and please General Hospital fans? Stay tuned to GH and keep checking CDL for General Hospital spoilers and news frequently to see what happens in the future with Jason and Sam and their family!