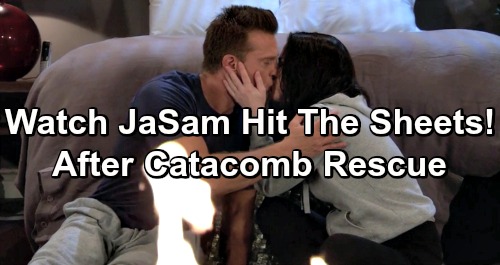 General Hospital (GH) spoilers tease that Oscar Nero’s (Garren Stitt) bucket list will lead to grave danger for several characters. He’s trying to check as many items off in his planner as possible, including one that’s awfully risky. Oscar admitted that he’d like to see the catacombs, so Josslyn Jacks (Eden McCoy) will be determined to make it happen.

Since the usual entrances are closed, Cameron Webber (William Lipton) piped up with a suggestion. He’s heard about a secret way in, so this will kick off the teens’ GH disaster. It looks like Cameron will hook them up with what he knows and then bail. Cam’s already in enough trouble as it is. He doesn’t need to get caught lurking somewhere he shouldn’t be while he’s on probation.

That means Josslyn and Oscar will likely be on their own. They won’t mind since they want to strengthen their bond in Oscar’s final weeks. Unfortunately, Joss and Oscar’s fun will take a perilous turn. It won’t be long until they’re in a desperate fight for their lives!

Oscar will face the possibility of cutting his remaining time short. Josslyn’s situation will be even worse since she’s not terminally ill. They’ll be terrified when they end up trapped with no exit in sight. Thankfully, Jason Morgan (Steve Burton) will ride to the rescue. It’s tough to believe he’ll just be randomly wandering around the catacombs, so Cameron might admit his friends are there.

Whatever the case, Jason will find himself on site with Sam McCall (Kelly Monaco). General Hospital spoilers say Jason will put his own life on the line to help. He’ll do everything he can to make sure Josslyn and Oscar make it home safe. Jason will save the teens, but who will save Jason? It’ll be Sam’s turn to make a rescue when Jason runs into some trouble of his own.

After the chaos winds down, Sam will want to relax with Jason at home. They’ll sit on the floor of her bedroom as they drink wine and eat grilled cheese sandwiches. Sam will joke about saving Jason’s butt and he’ll ultimately admit she did. Even Jason needs a helping hand sometimes!

This “JaSam” moment will be pretty surreal for Sam. She’ll talk about how many times she imagined a different outcome to their love story. Sam was devastated the night Jason disappeared into the water. She’ll confess that she used to go to bed and dream she rescued Jason. Sadly, Sam would always wake up to find that it was a dream and nothing more.

However, Jason will softly tell Sam that he’s there now. It’ll lead to some passionate kisses, which will quickly escalate. Jason and Sam will make love at last, so “JaSam” fans should appreciate this long-awaited steamy reunion.