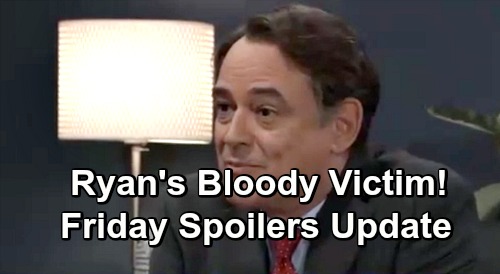 General Hospital (GH) spoilers for Friday, January 18, tease that Nina Reeves (Michelle Stafford) and Maxie West (Kirsten Storms) will face some issues. They’ll have a minor showdown as the book event kicks off, so GH fans can expect some tension. Nina will push Maxie to be totally honest with her. It sounds like Maxie’s been keeping a secret or two, so they’ll have to hash things out.

Speaking of secrets, Lulu Falconeri (Emme Rylan) will get closer to uncovering Ryan Chamberlain’s (Jon Lindstrom). She’ll talk to Laura Webber (Genie Francis) about the list of Ryan’s victims, which was spotted in Dr. Kevin Collins’ (Jon Lindstrom) office. Lulu won’t understand why Kevin would have that, so Laura may suggest she’ll have to ask “Kevin.” It’s clear that Laura doesn’t know what’s up with him anymore.

Meanwhile, Carly Corinthos (Laura Wright) will rope a reluctant Sonny Corinthos (Maurice Benard) into therapy. Since they’re both dealing with so much Mike Corbin (Max Gail) drama and everything else, Carly will think it’ll be good for them.

She’ll talk Sonny into it and confirm the arrangements with a devious Ryan. He’ll ask Sonny and Carly to meet him at Morgan Corinthos’ (Bryan Craig) grave.

Naturally, Carly will wonder what that’s all about. Sonny may agree that “Kevin” has some weird ideas lately. Nevertheless, these two have probably been meaning to visit the cemetery anyway. They like to go talk to Morgan as often as they can. Once Sonny and Carly are on their way, Ryan will get ready to kill them. He’ll be all set to snuff them out, but a phone call will change everything.

It looks like Lulu will contact “Kevin” and request a meeting about Ryan. She’ll have some questions that she thinks only “Kevin” can answer. Ryan will opt to take Lulu’s meeting and skip the “CarSon” murders. He’ll probably think he can just go after them later. Lulu’s threat will be far more pressing, so Ryan will want to get the job done.

Ava Jerome (Maura West) will remain in the dark on the twin swap as well as Ryan’s deadly mayhem. She’ll state that she isn’t going anywhere, so she likely means she’s not leaving without “Kevin.” Ava loves the way Ryan dotes on her and makes her feel like his queen. She has no plans to give that up and Ryan doesn’t want to blow things with her either.

That’s part of why Ryan will kill once again. He has to protect his dark secret for many reasons, but Ava is a big one. At GH, General Hospital spoilers say an unsuspecting Lulu will waltz in.

She’ll tell “Kevin” that she wants to discuss Ryan, so he’ll suggest she’s come to the right place. Ryan will discreetly grip a knife as they chat. He’ll be waiting for the perfect moment to do away with his prey.

It’d be risky to attack Lulu in Kevin’s office, so Ryan may follow her somewhere else. Regardless, General Hospital spoilers hint that Lulu will be the next victim. The good news is she’s not supposed to die. The bad news is her family and friends won’t know that. It seems they’ll have to play a horrible waiting game as Lulu fights to survive.

GH viewers will want to check out all the crazy action on Friday. We’ll give you updates as other details emerge. Stay tuned to the ABC soap and don’t forget to check CDL often for the latest General Hospital spoilers, updates and news.