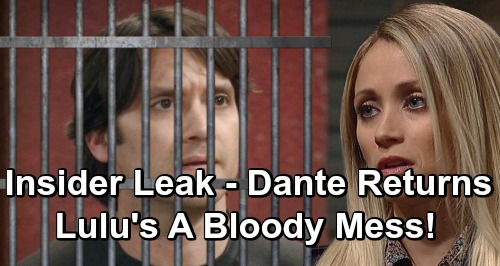 General Hospital (GH) spoilers tease that some leaked info points to a big story shocker. GH fans know that Dante Falconeri (Dominic Zamprogna) made the sudden and painful decision to leave Port Charles. He accepted a crucial WSB mission and promised to return to his family as soon as he could.

Of course, Zamprogna’s departure was the reason for this hasty exit. General Hospital needed a way to usher Dante off canvas quickly, but they obviously weren’t keen on killing him off. Nathan West’s (Ryan Paevey) death was rough enough, so GH viewers aren’t ready for another detective death.

Besides, Sonny Corinthos (Maurice Benard) already spends so much of his time mourning Morgan Corinthos (Bryan Craig). It’d be cruel to make him grieve for another son. Nevertheless, Dante can’t stay out of the picture indefinitely. General Hospital spoilers say Lulu Falconeri’s (Emme Rylan) next ordeal will lead to a stunning discovery. It’ll involve Dante and his own predicament.

Lulu recently mentioned that Dante was going deep undercover. He’s hoping to speed up his mission and get home to his loved ones sooner. Unfortunately, that means it’ll be difficult to contact Dante when tragedy strikes. It looks like Lulu will be a bloody mess after Ryan Chamberlain (Jon Lindstrom) takes action. General Hospital spoilers hint that Lulu will be in a desperate fight for her life!

Naturally, those with powerful connections will try to pull some strings. Jason Morgan (Steve Burton) will be involved in Anna Devane (Finola Hughes) and Robert Scorpio’s (Tristan Rogers) story soon. They’ll owe him a favor, so he may collect it for Sonny. Perhaps there’ll be a real push to get in touch with Dante.

Dante obviously needs to bail on his mission and get back to his family. Lulu will likely be in bad shape, but she won’t be the only one who needs his support. Rocco Falconeri (O’Neill Monahan) and Charlotte Cassadine (Scarlett Fernandez) will certainly need Dante, too.

Sadly, there’ll be a huge problem if some leaked casting sides are any indication. Audition scripts point to someone on a mission who’s completely fallen off the grid. As if a missing Dante wasn’t bad enough, another set of casting sides points to someone being held prisoner.

However, there’s also some good news. General Hospital is seeking a guard who ends up getting duped by this prisoner, who seemingly manages to get away. It sounds like Zamprogna will either return for a new arc or GH will go for a recast. Even if this prisoner is actually someone captured as part of a rescue, Dante will surely break free as well. He has to make it back home to Lulu!