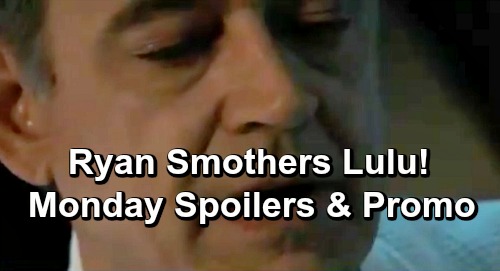 General Hospital (GH) spoilers for Monday, January 28, tease that Ryan Chamberlain (Jon Lindstrom) will try to finish the job. Lulu Falconeri (Emme Rylan) awoke just in time to see evil Ryan glaring over her. He greeted Lulu and now he intends to eliminate his worst threat.

Ryan will tell Lulu not to fight it as he moves in to smother her, but his latest murder attempt will also be foiled. Perhaps Ryan will hear someone coming and be forced to slip out. Regardless, this may cause a serious setback for Lulu. Ryan may do enough damage to put her back in a coma.

General Hospital spoilers say Laura Webber (Genie Francis) will ask for some alone time on Monday, so she may fear she was wrong about Lulu waking up. She only felt a couple hand squeezes, so Lulu’s doctors could argue that they might’ve been involuntary. However, Lulu’s going to wake up for good sooner or later. When she does, she’ll have no memory of either attack.

In the meantime, Robert Scorpio (Tristan Rogers) will ponder “Dr. Kevin Collins” and some hidden truths. He caught “Kevin” in a lie regarding the virus case, so he’ll tell Anna Devane (Finola Hughes) and Dr. Hamilton Finn (Michael Easton) that the good doctor may have had a secret life. They’ll wonder what else “Kevin” might be keeping to himself.

Over with Jordan Ashford (Briana Nicole Henry), she’ll be frustrated over the serial killer investigation. Dead ends are all they seem to hit, but Curtis Ashford (Donnell Turner) will think they must be missing something. Jordan will feel like Lulu’s statement is what they really need. She’s the only eyewitness who’s managed to survive the murderer’s horror show.

Other GH spoilers say Sam McCall (Kelly Monaco), Jason Morgan (Steve Burton) and Damian Spinelli (Bradford Anderson) will have a meeting. Sam will insist that she told them Shiloh Archer (Coby Ryan McLaughlin) was lying all along. They’ll consider some new details about Shiloh’s agenda and hope they can keep him from causing too much chaos.

Sam will plan to get as close to Shiloh as possible. She’ll go back to her con artist roots a bit, but that’ll require keeping her reunion with Jason on the down low. However, Sam will think it’ll be worth it if they can nail this guy and stop him from messing with Kristina Corinthos-Davis (Lexi Ainsworth). She’ll be desperate to prevent real damage.

Unfortunately, Shiloh will already have Kristina cornered across town. She’ll look nervous as Shiloh suggests that the mystery’s been solved. Maybe Shiloh will bring up his recent conversation with Alexis Davis (Nancy Lee Grahn) and mention something they talked about. Kristina may be upset about her family ganging up on Shiloh, but he’ll undoubtedly turn on the charm and offer reassurance.