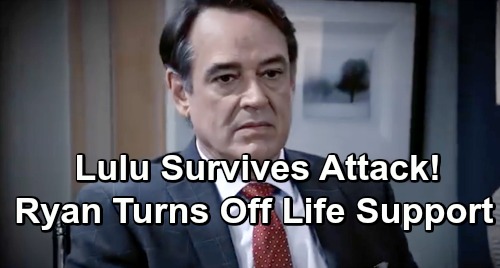 General Hospital (GH) spoilers tease that Ryan Chamberlain (Jon Lindstrom) will try to handle a growing problem. Lulu Falconeri (Emme Rylan) is a super snooper and that’s not a real issue for Ryan. He can’t let anyone find out Ryan’s still alive or else his whole plot could unravel.

Ryan doesn’t need somebody digging up the past either, which is exactly what Lulu’s been doing. She just realized the list “Dr. Kevin Collins” had in his office contained two extra murder victims. Naturally, Ryan’s worried Lulu will push this and figure out there’s more to the current “Kevin” than meets the eye. That’s why he’ll launch a deadly attack, but it turns out it won’t be so deadly after all.

By the time Ryan leaves that office, he may believe he got the job done. Ryan normally moves his victims for the maximum impact, but he probably won’t have the chance this time. Someone may show up before he can make this a true showcase of his murderous talents.

However, it seems Ryan will feel good about the situation. General Hospital spoilers say Ryan will do a bit of gloating. He probably wouldn’t do that if he thought Lulu could survive and identify him. Of course, that’ll become a real fear after Lulu indeed survives and poses a serious threat.

Ryan will realize he’s made a crucial error that needs to be remedied. On January 28, Ryan will be determined to finish what he began. It sounds like he’ll want to sneak in Lulu’s hospital room and complete his deadly mission. Ryan may intend on turning off Lulu’s life support and finally putting all this to rest.

Meanwhile, a distraught Laura Webber (Genie Francis) will seek a private moment. Maybe she’ll pull up a chair and talk to Lulu, who will undoubtedly be in a coma at GH. Laura’s presence could thwart Ryan’s evil plan. He can’t kill the mayor to get to Lulu. That would draw too much public attention and end his reign of terror in a flash. There could also be guards outside to protect Lulu from more harm.

General Hospital spoilers say Ryan will end up furious soon after. As Ava Jerome (Maura West) reevaluates their potential move and Lulu’s life hangs in the balance, Ryan will be pushed to his limit. Will he become so enraged that he strikes again? Will someone else land in danger thanks to Ryan’s agitated state?

It looks like some great stuff’s coming up in Port Charles. We’ll give you updates as other GH news emerges. Stay tuned to the ABC soap and don’t forget to check CDL often for the latest General Hospital spoilers, updates and news.