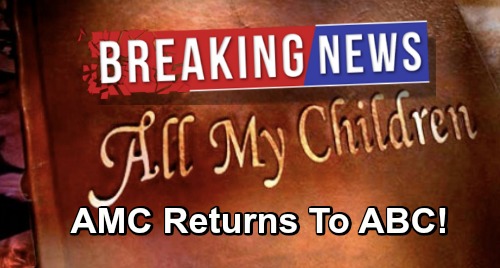 General Hospital (GH) spoilers has some exciting news to pass on for All My Children fans. Some of AMC’s fan favorite cast members will be appearing on a special edition of the ABC talk show “Strahan and Sarah” to visit and reminisce about their AMC days.

Jacob Young also announced the reunion show on his Twitter feed, and he received an outpouring of fan comments on the tweet. Most fans are excited to see the reunion, and most commented that they couldn’t wait to see the show.

The former cast members will surely have a great time reminiscing about their AMC days. All My Children appeared on ABC from 1970 to 2011, and also appeared briefly on the Online Network in 2013.

Will you be tuning in for the AMC reunion? Stay tuned to the ABC soap and don’t forget to check CDL often for the latest General Hospital spoilers, updates, and news.