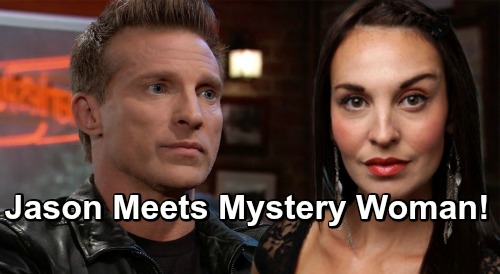 General Hospital (GH) spoilers tease that Jason Morgan (Steve Burton) will meet a mysterious woman. He’ll get updates on the Beechers Corners chapter of Dawn of Day, so he’ll decide that might be the place to seek answers. Shiloh Archer (Coby Ryan McLaughlin) seems awfully caught up in the Port Charles chapter at the moment. Jason might have more luck somewhere without Shiloh hovering.

Between Kristina Corinthos-Davis (Lexi Ainsworth) and Sam McCall (Kelly Monaco), Shiloh’s got his hands full in PC. He’ll be busy reeling these sisters in – or so he thinks. Kristina is indeed falling for Shiloh’s tactics, but Sam’s just trying to play the game. It’s possible she’ll let her guard down and buy Shiloh’s act eventually, but she’ll stick to the plan for now.

While Shiloh’s distracted, Jason will make his way over to Beechers Corners. It looks like he’ll find DOD’s other community house and look for someone who can help him. Kristina replaced Daisy Kwan (Kelsey Wang) as the PC chapter’s ambassador, but the Beechers Corners chapter surely needs an ambassador as well. Perhaps that’s the person Jason will speak with when he arrives.

That brings us to the mysterious woman we mentioned. Inga Cadranel has been cast in the role of Harmony, but that’s obviously not her real name. Shiloh was once David Henry Archer, but he went by “Hank” until he became Shiloh. As part of his teachings, Shiloh pushes the idea of a clean slate and a new name to signify it. He insists it’s a helpful way to put distance between the present and the past.

“Harmony” probably feels harmony within the DOD community, so she must’ve picked that name to honor it. Jason will tell Harmony he wants to know all about Dawn of Day’s principles and leader. Harmony will be eager to recruit a new member, so she’ll likely share a great deal. However, what Jason really wants to learn could be harder to pry out of her.

General Hospital spoilers say Jason will be looking for the dark, buried secrets of this organization. He can’t come right out and say that, but he can poke and prod until Harmony potentially spills too much. Will Harmony realize Jason is trouble and could pose a threat to Shiloh? Will she remain oblivious and divulge some shockers instead?

It’d be a waste of airtime if Jason didn’t walk away with a clue or two, so GH fans should expect some bombshells. Once Jason reconvenes with Sam, perhaps they’ll both have made progress. General Hospital spoilers hint that this storyline will bring plenty of twists and turns, so stay tuned.

Are you excited to see Harmony’s debut? Will she put Jason on the path to some stunning revelations? We’ll keep you posted as other GH news comes in. Stick with the ABC soap and don’t forget to check CDL often for the latest General Hospital spoilers, updates and news.