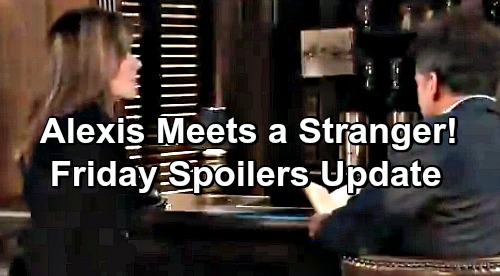 Nevertheless, a problem like that is a piece of cake for Ryan. He’ll undoubtedly plan to smooth things over with Ava and get Griffin out of the picture. General Hospital spoilers say Griffin will become Ryan’s next target eventually.

For now, Ryan will try to see how serious the threat is. Since Ryan just pinned the murders on Franco Baldwin (Roger Howarth), he may have reservations about committing another. If Ryan’s going to jeopardize his own plan, he’d better make sure it’s necessary – or at least worth it.

“Kevin” will corner Griffin and wonder if he’s got anything he’d like to divulge. He’ll drop hints to see if Griffin wants Ava back, but Dr. Munro’s answer may not matter. Griffin was simply consoling Ava in her time of need, but the green-eyed monster will likely take over and throw logic out the window for Ryan.

Of course, Ryan’s scheme to frame Franco may not work out exactly as planned anyway. Scott Baldwin (Kin Shriner) is an excellent attorney, so he’ll come up with something that might help on Friday. He’ll make it clear that Franco won’t be railroaded by Jordan Ashford (Briana Nicole Henry) and Margaux Dawson (Elizabeth Hendrickson). With any luck, Scott’s proof can put a stop to that.

Will Franco have an ironclad alibi for one or more of the killings? That could lead to some dropped charges, but what about the attack on Lulu Falconeri (Emme Rylan)? You can bet Franco will remain in hot water for that, so his nightmare will continue. Elizabeth Webber (Rebecca Herbst) will absolutely hate this, but she’ll know that she has to be strong and stand by her man.

Over with Kristina Corinthos-Davis (Lexi Ainsworth), she’ll express her appreciation. Sonny Corinthos (Maurice Benard) will suggest that maybe Dawn of Day isn’t all bad. He can see that this community is bizarre and uses some questionable strategies, but it makes Kristina happy. Besides, she’s a grown woman who’s capable of making her own choices.

Sonny will show his support, but he’ll think Shiloh Archer (Coby Ryan McLaughlin) had better stay in line. He won’t let anyone hurt Kristina, so she’ll be grateful that he cares so much. Meanwhile, Damian Spinelli (Bradford Anderson) will fill Jason Morgan (Steve Burton) in on some Shiloh developments. Spinelli’s research will lead Jason in an interesting direction, so there’s much more drama ahead.

Other General Hospital spoilers say Shiloh will interrogate Sam McCall (Kelly Monaco). He’ll draw attention to the fact that Sam hasn’t settled down with Jason. Shiloh may wonder what’s stopping Sam, so she’ll offer some lies and hope he buys them. In reality, settling down with Jason is exactly what Sam’s trying to do. It’s just happening behind closed doors!

GH fans will also see Alexis Davis (Nancy Lee Grahn) cross paths with someone irritating. She’ll meet a man with a super-sized ego and lash out at him. However, Alexis tends to overreact and that’s probably what’s happening here. It appears she’ll butt heads with Neil (Joe Flanigan), a hunk who will ultimately become Alexis’ new therapist – and new boyfriend if he plays his cards right.

It sounds like General Hospital has another action-packed episode in store. We’ll give you updates as other GH news comes in. Stick with the ABC soap and don’t forget to check CDL often for the latest General Hospital spoilers, updates and news.