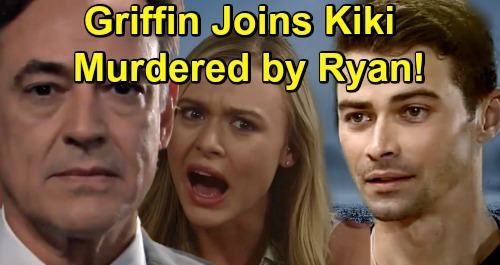 General Hospital (GH) spoilers tease that the evidence will continue to mount against Franco Baldwin (Roger Howarth). Thanks to Ryan Chamberlain’s (Jon Lindstrom) twisted plan, Franco will have to sit in lockup for a while. He’ll feel like he’s never going to escape his inner demons or the darkness in his past.

The PCPD will be stuck on Franco as the killer for a while, but they’ll have to move on eventually. GH fans know Franco isn’t responsible, so he’ll inevitably be cleared sooner or later. There’s a good chance Ryan’s main goal here isn’t to frame Franco permanently. He simply wants to get away with his crimes.

Ever since Ryan started wreaking deadly havoc, he’s been quite consistent in his pattern. Ryan wants two things when he commits a murder – or attempted murder, which was the case with Lulu Falconeri (Emme Rylan). This killer is always looking for confusion and attention.

Ryan probably knew the charges against Dr. Griffin Munro (Matt Cohen) wouldn’t stick, but he framed him for Kiki’s murder anyway. It threw the cops off for a while and added to the mystery of it all. Ryan also made a big splash and proved he could pull one over on the PCPD.

It appears Ryan is poised to do something similar here. He’s pretty much already accomplished what he needed to. Lulu remembered the wrong face during her hypnosis session. Even if she remembers the right one later, how can anyone trust what she says? How can Lulu herself even trust her own mind? Ryan’s got the confusion element taken care of.

However, there’s no way Ryan can ditch his murderous plans and let Franco get all the glory! He craves the spotlight even if his identify isn’t known. It won’t be long until Ryan’s plotting against another unsuspecting victim. Perhaps Ryan will plan to kill again while Franco’s locked up and prove he’s fooled the PCPD once again.

Regardless, General Hospital spoilers say Dr. Griffin Munro will be added to Ryan’s murder list. Ryan will target the still grieving doc and hope his efforts work out better than with Lulu. It looks like Ava Jerome (Maura West) could cause some drama here. She’ll show up just in time on February 11, which is the same day Griffin will get an unexpected visit.

There’s a good chance Ava will inadvertently derail Ryan’s deadly scheme, but for how long? General Hospital spoilers say Matt Cohen is likely out as Griffin. Ryan may try again and succeed at some point.

It’s easy to imagine GH killing Griffin off as part of this plot. It would bring tremendous pain for Griffin’s loved ones like Anna Devane (Finola Hughes). General Hospital would also add to the anguish for Ava. She loved Griffin once upon a time. Consider how horrible she’ll feel if her connection to Ryan costs both Kiki AND Griffin their lives. Ava may feel like their blood is on her hands.