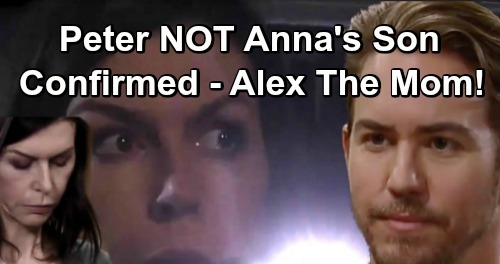 General Hospital (GH) spoilers tease that a major twist is coming up on the ABC soap. Several huge leaks have been gushing lately, so this is the latest one. It involves Peter August (Wes Ramsey) and a rewrite regarding his mother.

When it was revealed that Anna Devane (Finola Hughes) willingly slept with Cesar Faison (Anders Hove) as part of a mission, many fans cried foul. It was an unpopular story, so it’s due for a redo. Fortunately, all the puzzle pieces are just waiting to be connected. This mystery virus story is building to a revelation about Anna’s past.

Anna remembers giving birth on the same day that Peter was born. Of course, remembering something happened doesn’t mean much on GH. Drew Cain (Billy Miller) swore up and down that he was Jason Morgan (Steve Burton). He was furious when the real Jason appeared. Since Drew’s memories were so deeply manipulated, he was convinced Jason had to be an impostor.

Even now, Drew’s head is filled with so many things he never experienced. His memories seem vivid and real, but they aren’t. They were planted as part of the memory-mapping plot. There’s a good chance Anna’s memories of Peter’s birth were planted, too.

According to a GH insider, Alex Devane Marick (Finola Hughes) will be revealed as Peter’s true mom. CDL previously speculated that this would be the case. The twist should placate any fans who are still angry about the Faison sex and create a new issue for Peter. He was finally warming up to Anna, who’s kind and only wanted to see Peter happy. Alex probably didn’t care then and won’t care now.

In other words, this could stir up more abandonment issues for Peter. Anna will also be affected. She wanted to get to know Peter as her son, but she’ll have to settle for knowing him as her nephew instead. General Hospital spoilers say the Alex bomb will drop in a surprising way, so it should be interesting to see what GH has in store.

Although the Mama Alex twist isn’t official yet, this leak is from an extremely reliable source and so it is considered confirmed. General Hospital spoilers suggest Anna and Peter are indeed in for a serious shock! We’ll give you updates as other GH news comes in. Stay tuned to the ABC soap and don’t forget to check CDL often for the latest General Hospital spoilers, updates and news.