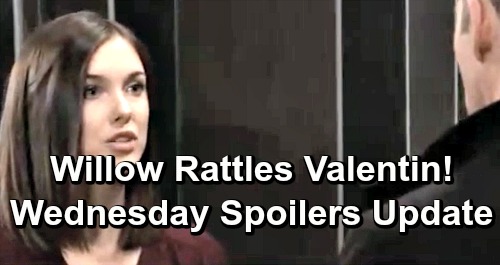 General Hospital (GH) spoilers for Wednesday, February 6, tease that Lulu Falconeri (Emme Rylan) will be deeply disturbed her hypnosis session. Laura Webber (Genie Francis) will be focused on keeping Lulu calm and avoiding any setbacks in her recovery. However, she’ll definitely be curious about what memories might’ve surfaced.

Lulu told “Dr. Kevin Collins” aka Ryan Chamberlain (Jon Lindstrom) that Franco Baldwin (Roger Howarth) was her attacker. She’ll divulge that false shocker to Laura on Wednesday, so it won’t be long until Jordan Ashford (Briana Nicole Henry) gets the news as well. Jordan suggested hypnosis session evidence would be flimsy, but perhaps Ryan will eventually hand over those incriminating notes.

Regardless, it appears Jordan will have enough to make an arrest. GH’s preview shows Jordan grabbing her gun and aiming at someone. Since Franco is the prime suspect, he’ll probably be the one who’s cornered and told to freeze. Franco’s about to find himself in serious trouble, so stay tuned to watch Elizabeth Webber (Rebecca Herbst) rush to her fiancé’s defense.

Elsewhere, Liesl Obrecht (Kathleen Gati) will push Anna Devane (Finola Hughes) to her breaking point. Anna is just now getting to know Peter August (Wes Ramsey), but she already cares deeply for him. She won’t tolerate any mistreatment, especially from someone like Dr. O!

Anna will deliver a death threat on Wednesday, so you know she means business. She’ll insist that if Liesl dares to harm Peter again, she’ll pay with her life. Over with Maxie West (Kirsten Storms), she’ll get a warning from Peter. He’ll rant about Valentin Cassadine (James Patrick Stuart) and all his lies. Valentin tends to use deception as a strategy for getting ahead, so Peter will think Maxie and the rest of Port Charles should be wary.

Other General Hospital spoilers say Nina Reeves (Michelle Stafford) will have a nice chat with her fake daughter. She’ll tell Sasha Gilmore (Sofia Mattsson) that Valentin granted her ultimate wish. Nina wanted a child more than anything, so she’s naturally appreciative. She believes Valentin made a real reunion happen, but Sasha knows better.

Although Sasha doesn’t trust Valentin and isn’t a fan of all his tactics, she might support the idea of remarriage. Sasha truly wants Nina to have all the happiness in the world. If Valentin can give her that – even with so much dishonesty – Sasha may be on board with their plans for the future.

Nina isn’t all in on a wedding yet, but she at least seems to be considering it. Sasha could give her pretend mom a push on Wednesday. GH spoilers point to a big shift in Nina’s way of thinking, so a major decision will put her on a new path soon.

Finally, Willow Tait (Katelyn MacMullen) will have some startling updates. She’ll fill Valentin in on an alarming situation that he should be aware of. This most likely has something to do with Charlotte Cassadine (Scarlett Fernandez) and her many issues at school. If there’s another Charlotte fire that needs to be put out, you can bet Valentin will take care of it.