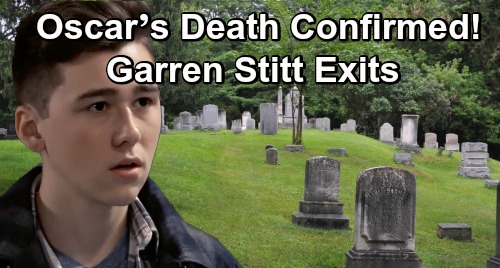 General Hospital (GH) spoilers reveal that a recent promo has filled fans with hope. The show put out a weekly preview that appears to feature Oscar Nero (Garren Stitt) getting good news – or at least not terrible news – at GH. Unfortunately, that promo will turn out to be a bit misleading. Even if Oscar learns he has more time than he thought, he still has an inoperable brain tumor.

Dr. Kim Nero (Tamara Braun) and Drew Cain (Billy Miller) made the difficult decision to accept Oscar’s fate. Josslyn Jacks (Eden McCoy) eventually came to a place of acceptance as well. She was eager to find some crazy cure for a while, but now she’s just focused on living in the moment. Joss just wants to spend as much time with Oscar as possible and make their remaining weeks together count.

Of course, many GH fans were understandably holding out hope. In the soap world, wild twists and sudden miracles are the norm. If Oscar’s tumor simply disappeared, no one would’ve been surprised. However, it seems the show’s committed to telling an honest story here. They want the gripping drama of Oscar and his loved ones saying goodbye along with the crushing aftermath that’ll follow.

Since inoperable brain tumors are a very real issue, it would cheapen the story to have Oscar suddenly get well. It’d be like if Mike Corbin’s (Max Gail) Alzheimer’s just went away. There are certain stories that work best with a realistic approach. Dying Oscar’s latest crisis is definitely one of them. As much as we’d like to see Oscar healthy and thriving again, it’s probably best to stick with the medical facts in this case.

According to a reliable GH insider, Oscar won’t get a last-minute happy ending like many had hoped. This person insists that Oscar will indeed die, which means Garren Stitt will leave the show. General Hospital spoilers back up this idea since there are some dark times ahead for Drew, Kim and Monica Quartermaine (Leslie Charleson).

It looks like it’s time for GH viewers to accept Oscar’s fate along with his family and friends. This should be hard to watch, but at least we have time to process the info and prepare for the inevitable. We’ll give you updates as other General Hospital details emerge. Stay tuned to the ABC soap and don’t forget to check CDL often for the latest General Hospital spoilers, updates and news.