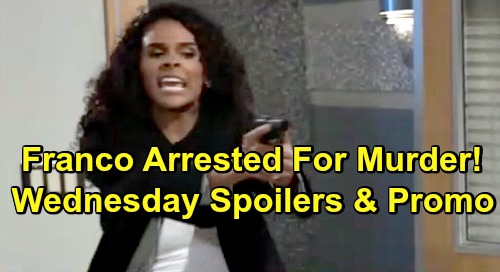 General Hospital (GH) spoilers for Wednesday, February 6, tease that Liesl Obrecht (Kathleen Gati) will push Anna Devane’s (Finola Hughes) buttons. She’ll pick the wrong topic and get a lethal warning in return. Liesl may start badmouthing Peter August (Wes Ramsey) and hinting at more trouble for him. It looks like Anna will contend that if Liesl ever does anything to harm Peter again, she’s a dead woman!

Over with Nina Reeves (Michelle Stafford), she’ll try to explain her point of view to Sasha Gilmore (Sofia Mattsson). Nina just admitted that Valentin Cassadine (James Patrick Stuart) asked her to marry him again. Sasha seemed concerned by the news, so Nina will explain why she was willing to give Valentin another. He gave her back her child – or at least she thinks he did.

Nina will suggest that Valentin did something he knew would really matter. She feels like Valentin understands her and she understands him, too. There’s a bond between them that’s tough to break.

General Hospital spoilers say Sasha will prompt a major change of heart for Nina on Wednesday’s new GH episode, February 6. Since derailing Nina and Valentin’s relationship wouldn’t fit the story just yet, perhaps Sasha will decide to support their reunion enthusiastically. She may give Nina the nudge she needs to start planning a wedding and preparing for their future.

Sasha is running this fake daughter scheme now, but she truly wants Nina to be happy. That may be her motive for shifting gears a bit and shoving Nina in Valentin’s direction. Plus, Sasha can only take her rebel streak so far. Valentin is a powerful man, so Sasha has to be a hint worried about pushing him too hard.

Meanwhile, Valentin will have a different problem to deal with. He’ll get a visit from Willow Tait (Katelyn MacMullen), who’ll want to apprise Valentin of a troubling situation. What’s Charlotte Cassadine (Scarlett Fernandez) up to this time?

Charlotte bullied Aiden Webber (Jason David) and ultimately got caught cheating off another kid’s paper. She took a couple days off after Lulu Falconeri’s (Emme Rylan) attack, but she’s probably back at school by now. Charlotte may not be doing very well thanks to all the stress.

Whatever the case, the real reason for this visit is most likely to keep Nina’s true daughter in Valentin’s orbit. There’s no confirmation on Willow being the real deal yet, but the writing’s on the wall. Elsewhere, Peter will warn Maxie West (Kirsten Storms) to be careful when it comes to Valentin. He’ll suggest that Valentin will lie whenever it’s expedient, so anything out of his mouth can’t be trusted.

Other General Hospital spoilers say Lulu will freak over her false memory. She just visualized Franco Baldwin’s (Roger Howarth) face as he approached for the kill. GH fans know that was actually Ryan Chamberlain (Jon Lindstrom), but Lulu doesn’t. She’ll insist that Franco tried to murder her and quickly spread the word.

Laura Webber (Genie Francis) was hoping the cops got it wrong, but she refused to rule Franco out as a suspect. She has to keep an open mind in this crazy town! Nevertheless, it’ll still be a shock when Lulu confirms Franco as her attacker. Laura will naturally grow fearful for Elizabeth Webber (Rebecca Herbst) and her boys.

General Hospital’s preview video shows Jordan Ashford (Briana Nicole Henry) pulling a gun on someone at GH. She’ll tell this person to freeze and keep his or her hands where she can see them. Perhaps Jordan score enough evidence to make the arrest and rock Franco’s world. He’ll have to rely on Liz’s faith in him over the next few weeks.

It sounds like some exciting moments are ahead in Port Charles. We’ll give you updates as other GH details emerge. Stay tuned to the ABC soap and don’t forget to check CDL often for the latest General Hospital spoilers, updates and news.