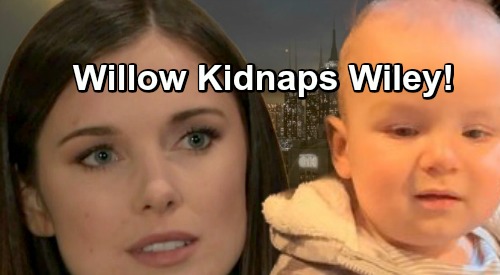 General Hospital (GH) spoilers tease that we may see another side of Willow Tait (Katelyn MacMullen). GH fans know Willow is the real Wiley Cooper-Jones’ birth mother. She has no idea the baby Brad Cooper (Parry Shen) and Lucas Jones (Ryan Carnes) are raising isn’t her son, so she’ll continue to make waves. In fact, Willow could cause full-blown chaos depending on how far she’s willing to take this.

In a recent GH episode, Willow was awfully hostile with Julian Jerome (William deVry). She’s longing for her baby and we understand that, but her body language and demeanor were heading into creepy territory. Willow seems like the kind of character who could have some crazy hiding just under the surface. Could Willow get desperate enough to kidnap “Wiley” and go on the run?

Other General Hospital spoilers say Willow may be Nina Reeves’ (Michelle Stafford) real daughter. If she is, Willow may have inherited some of that Westbourne crazy! Long-time GH viewerrs will recall that when Nina first came to town, she wasn’t what most people would call normal. Nina did some crazy things when she was pushed to desperation.

For starters, Nina faked paralysis for several months as she tried to regain the love of her ex-husband, Silas Clay (Michael Easton). She also sent Ava Jerome (Maura West) into labor and kidnapped her newborn baby, Avery Corinthos (Ava and Grace Scarola). Nina and Franco Baldwin (Roger Howarth) made a break for it with Avery, so the situation got pretty out of control.

Nina also pushed her mother down a flight of stairs and hit her over the head with a lamp at one point. Liesl Obrecht (Kathleen Gati) has certainly committed her fair share of outrageous crimes as well. Even Britt Westbourne (Kelly Thiebaud) has been known to shake up her life with some nutty drama. Crazy runs in the family, so Willow may prove she’s truly one of them!

Do you think Willow will be revealed as Nina’s true daughter? Will her crazy side come out with a kidnapping plot? Michael Corinthos (Chad Duell) would fear for his godson, but that’s only because he doesn’t know it’s his actual son. Willow would be running off with little Jonah Corinthos, so this would be a total mess.

Whatever the case, let’s hope General Hospital has some good material in store for Willow. A crazy turn would give her some substance and would kick this storyline up a notch – as well as shock Port Charles. We’ll give you updates as other GH news comes in. Stay tuned to the ABC soap and don’t forget to check CDL often for the latest General Hospital spoilers, updates and news.