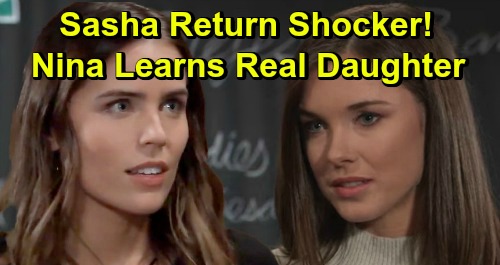 General Hospital (GH) spoilers tease that a big return is coming up. When Sasha Gilmore (Sofia Mattsson) left town, we all knew it was just a matter of time until she came back. Sasha’s a crucial part of the fake daughter plot. Valentin Cassadine (James Patrick Stuart) couldn’t have pulled it off without Sasha’s help.

Sasha had the power to give Valentin his reunion with Nina Reeves (Michelle Stafford), but she also has the power to take it away. That’s why Valentin was excited to see her leave Port Charles. He feels a lot better about things without Sasha in Nina’s orbit.

Liesl Obrecht (Kathleen Gati) emerged as a surprise threat, but Valentin believes he’s handled that for now. He’s enjoying being a couple with Nina again and feels like nothing can stand in their way. Of course, that’s obviously not true. Just because Sasha’s out of town doesn’t mean she’s gone forever.

In fact, it looks like we finally have a return airdate for the secretive brunette. On February 5, General Hospital spoilers say Nina will get a big surprise courtesy of Sasha. That could actually be two surprises based on the info that follows. Let’s consider how this might play out.

Sasha’s first surprise will likely be her Port Charles comeback. She may arrive for a visit and leave Nina overjoyed. All Nina ever wanted was to know and love her child, so she’s accomplished those goals. Nina’s so grateful that Sasha’s in her life and it’s all thanks to Valentin.

Sasha even seemed to genuinely care about Nina by the time she left. That could be a crucial part of the story. Perhaps Sasha’s been battling guilt off canvas. Will she return ready to blow the lid off Valentin’s plot? Sasha’s arrival will be surprising enough for Nina, but another shocker could truly rock her world.

On February 6, General Hospital spoilers say Nina will do a dramatic about-face. Her change of heart will be a real doozy, so it makes sense that it’ll involve her reunion. Valentin wants to keep rebuilding their life together, but Nina may throw that option out the window.

If Sasha returns to make a full confession, Nina may change her mind about her future with Valentin and insist they’re over for good. GH may be hoping to wrap up that phase of the daughter story so they can move on to the next one. After all, if Sasha isn’t Nina’s kid, the real one must still be out there somewhere. Once the Sasha part is done, General Hospital can help Nina put the puzzle together.

There’s a good chance Willow Tait (Katelyn MacMullen) is the daughter Nina’s seeking. If she is, how will Nina figure it out? Will the other half of the heart pendant be the true tipoff? We’ll give you updates as other GH news comes in. Stay tuned to the ABC soap and don’t forget to check CDL often for the latest General Hospital spoilers, updates and news.