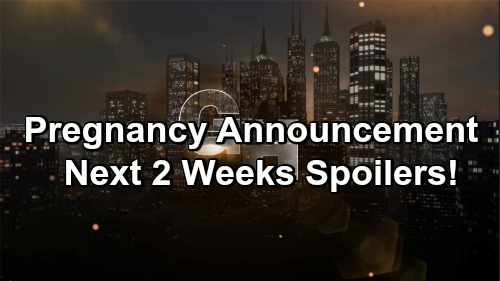 General Hospital (GH) spoilers for the next two weeks tease that the drama’s about to heat up. During the week of February 4-8, Franco Baldwin (Roger Howarth) will open up to “Dr. Kevin Collins” aka Ryan Chamberlain (Jon Lindstrom). He’ll get some bad advice as he relives his horrible history and struggles to cope with the suspicions he’s facing.

Franco will at least find a nice distraction later. General Hospital spoilers say he’ll ask Aiden Webber (Jason David) if he’d like to go ice skating, so it won’t be long until they’re zooming on the ice and chatting away. Franco will enjoy watching Aiden have some moments of happiness. Poor Aiden doesn’t get many of those at school lately!

GH fans can also expect Lucas Jones (Ryan Carnes) to offer sympathy to someone. He might hear more about Aiden’s situation and chime in. Elizabeth Webber (Rebecca Herbst) recently got some guidance from Lucas and Brad Cooper (Parry Shen), so they’ll be glad to provide additional support whenever she needs it.

Other General Hospital spoilers say Damian Spinelli (Bradford Anderson) will come up with some interesting Shiloh Archer (Coby Ryan McLaughlin) info. As Sam McCall (Kelly Monaco) cozies up to the DOD’s leader, Spinelli and Jason Morgan (Steve Burton) will debate the new lead. It sounds like Shiloh’s past could contain some explosive secrets.

Over with Nina Reeves (Michelle Stafford), she’ll be thrilled when Sasha Gilmore (Sofia Mattsson) returns to Port Charles. Sasha will have some family time with Nina as well as Charlotte Cassadine (Scarlett Fernandez). Of course, Valentin will monitor Sasha’s activities nervously. He’ll want to be sure Sasha keeps her mouth shut about the fake daughter secret.

However, Sasha’s comeback could actually be beneficial for Valentin at first. She’ll push Nina toward a decision that Valentin should appreciate. Will Nina decide to remarry Valentin soon? During the week of February 11-15, love will be in the air. Nina and Valentin will come together for a sweet Valentine’s Day celebration, but Valentin had better enjoy his time on cloud nine while he can!

Sasha’s threat will hang over Valentin and Nina’s relationship, but they’ll keep going strong for now. Meanwhile, one Port Charles couple will announce that they’re expecting a baby. Valentine’s Day will definitely be extra special for this GH duo.

Next, Carly Corinthos (Laura Wright) and Sonny Corinthos (Maurice Benard) will discuss their past, present and future. They’ll take stock of their marriage and where they go from here. A romantic getaway will provide the perfect excuse to walk down memory lane and prepare for whatever this road may lead them.

General Hospital spoilers say Nelle Benson (Chloe Lanier) will get in touch with Michael Corinthos (Chad Duell) as well. Brad could get pretty rattled when he gets updates! He’d much rather have Nelle keep quiet behind bars. Elsewhere, Kristina Corinthos-Davis (Lexi Ainsworth) will find herself feeling jealous. The closer Sam and Shiloh get, the more left out Kristina will feel.

Kristina will be green with envy soon, which could lead to some unanticipated obstacles for scheming Sam. We’ll keep you posted as other GH news comes in. Stay tuned to the ABC soap and don’t forget to check CDL often for the latest General Hospital spoilers, updates and news.