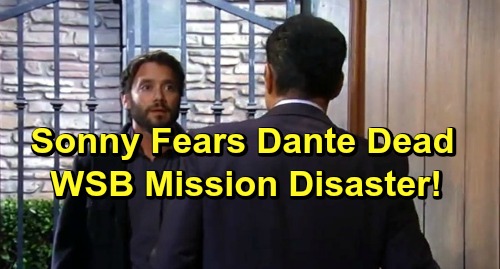 General Hospital (GH) spoilers tease that Sonny Corinthos (Maurice Benard) will pay Anna Devane (Finola Hughes) a visit. He’ll apologize for not calling beforehand, but Anna will assure Sonny that it’s no trouble. She’ll realize Sonny seems uneasy, so she’ll want to do whatever she can to help.

First, Sonny will deliver some good news. He’ll bring Anna up to speed on Lulu Falconeri’s (Emme Rylan) recovery and suggest that they’re lucky she pulled through. Things were dicey for a while, so Lulu’s loved ones are glad she’s on the mend.

Of course, Dante Falconeri (Dominic Zamprogna) remains unreachable and completely out of the loop. General Hospital spoilers say Sonny will be surprised by just out off the grid Dante is. He’ll contend that it’s like Dante vanished. Sonny’s got a guy following every possible lead and making a real effort to track Dante down. Sadly, he hasn’t come up with anything yet.

Sonny will be disappointed by all the dead ends, but he’ll hope Anna can turn this investigation around. He’ll point out that since Dante is on assignment for the WSB, he’s hoping Anna can look into this and offer more information.

Anna will understand that Sonny’s desperate, so she’ll quickly agree. She won’t be able to make any promises, but she’ll at least dig around and see what she can do.

Meanwhile, Robert Scorpio (Tristan Rogers) and Dr. Hamilton Finn (Michael Easton) will prepare for some research. They’ll grab some books as they seek the scoop on Dr. Cabot’s project, which involves identical twins and a mysterious virus. When they arrive at Anna’s house, they’ll encounter Sonny. He’ll be waiting on Anna to make some calls and get back to him about Dante’s possible location.

Robert will note that Sonny is the last person he expected to find there. He’ll snap at the mob boss, but Sonny will insist that he just had a favor to ask. Talk will turn to Raj Patel, the man at the center of Dante’s mission. Sonny will be taken aback when Robert mentions the name and relays what he knows. Robert will simply suggest that he tries to keep up with the latest WBS buzz.

Soon after, Anna will reappear looking awfully worried. She’ll seem like she’s got some unfortunate updates to pass along. Robert will apparently know what’s up already, so he’ll ask if Anna wants to break it to Sonny or if she’d rather let him do it.

Either way, it seems Dante is nowhere to be found. Word has it the WSB lost track of him, so Sonny should be deeply concerned. General Hospital spoilers hint that Sonny will continue his search, but it could pull him into some danger. The same goes for Robert, who will also help out with tracking down Dante.

Since Dante has gone missing, that’ll naturally lead to the assumption that he’s somewhere being held against his will. Dante wouldn’t stay away from his family and ignore the WSB. Sonny, Robert and Anna should conclude that Dante may be a prisoner somewhere. They may even fear Dante’s dead, but their minds want to go to that dark place until they have to.