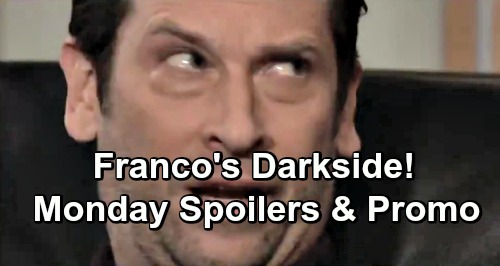 General Hospital (GH) spoilers for Monday, February 4, tease that Ava Jerome (Maura West) will corner Harrison Chase (Josh Swickard) and demand some answers. She’ll want to know what Chase is doing to find the monster who killed her daughter. Ava was coping fairly well for a while, but her anger over Kiki Jerome’s (Hayley Erin) murder is now worse than ever. She’s clearly spiraling out of control.

Chase will assure Ava that he’s doing his part to catch the killer. He doesn’t want this kind of danger on the streets any more than Ava does. She’ll remain frustrated by the PCPD’s lack of progress, but Jordan Ashford (Briana Nicole Henry) is hoping for a breakthrough soon. Lulu Falconeri (Emme Rylan) has agreed to try hypnotherapy, so she’ll be eager to get started.

Of course, Jordan will wonder if Lulu’s sure about this. Hypnosis could bring back Lulu’s memories of the attack, but it could also be extremely traumatic. Jordan will just want Lulu to know what she’s signing up for. General Hospital spoilers say Lulu will be determined to proceed. She’ll insist that if hypnosis can get her to remember the killer, she’s all for it.

Over with Franco Baldwin (Roger Howarth), he’ll have a difficult session with “Dr. Kevin Collins” aka Ryan Chamberlain (Jon Lindstrom). “Kevin” agreed to take Franco on as a patient again, but that’s only because he intends to mess with his mind. Ryan will force Franco to recall his deadly past and sink back into a dark place. It’ll leave Franco upset and wondering what kind of man he is on Monday.

Ryan will end up manipulating Lulu’s hypnotherapy, too. It’s all part of his new plan to frame Franco for Port Charles’ shocking crime spree. Across town, Sonny Corinthos (Maurice Benard) will reach out to Anna Devane (Finola Hughes). He’ll ask for her help, so this most likely involves using Anna’s WSB connections to track down Dante Falconeri (Dominic Zamprogna).

GH fans can expect Anna to do whatever she can. She’ll want to come through for Sonny on this desperate mission. Lulu could use Dante’s love and support right now. Next, Jason Morgan (Steve Burton) will pay Kristina Corinthos (Lexi Ainworth) a visit at Charlie’s Pub. They’ll discuss how Sam McCall’s (Kelly Monaco) taking some time to be on her own and reflect on her new path.

Kristina will insist that’s exactly what Sam needs. She’s been brainwashed into believing everything Shiloh Archer (Coby Ryan McLaughlin) says, so she’ll feel like Sam could benefit from Dawn of Day’s teachings. Of course, Kristina doesn’t know Sam’s plotting against Shiloh. General Hospital spoilers say Sam will try to con Shiloh into believing she’s weak. She’ll make him see her as someone desperate for guidance.

Shiloh will lean in close and contend that DOD can help Sam. He’ll hope she agrees to become part of the community, but Sam can’t rush into this. She has to make Shiloh think he’s talking her into it, so she’ll play it cool and make this as believable as possible.